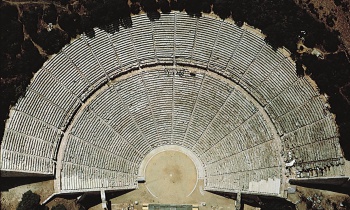 Aristotle (Ἀριστοτέλους)'s Poetics (Περὶ ποιητικῆς; Peri poiêtikês; On Poetics) is the earliest surviving work of dramatic theory and the first extant philosophical treatise to focus on literary theory. It was written, depending on the interpretation, sometime between 347-335 BCE.

The Poetics is about two things: "poiêsis understood as poetry, or imitation of action, and poiêsis understood as action, which is also imitation of action. It is the distinctive feature of human action, that whenever we choose what to do, we imagine an action for ourselves as though we were inspecting it from the outside [such as in risking life in battle for the sake of the kalon (the noble, beautiful), acting from a moral virtue, andreia (courage), rather than viewing it as something unpleasant (xiii-xv)]. Intentions are nothing more than imagined actions [all courage is metaphorical (xv)], internalizings of the external. All action is therefore imitation of action; it is poetic." (Benardete & Davis 2002:xvii)

The general, but not universal, view is that there were originally two books to Poetics, one on tragedy and a second on comedy. In the extant text there is no account of comedy. (Benardete & Davis 2002:xi:n3)

The now established convention accepts four primary witnesses to the text (texts that do not depend on any other extant source):

The Arabic translation of the Poetics has been known to exist for close to two centuries, and there have been repeated attempts to use this source by both classicists and orientalists, often working in tandem: Vahlen and Sachau, Immisch and Socin, Butcher and Margoliouth, Gudeman and Tkatsch, and Kassel and Walzer, to name the most prominent (Gutas 2012:xi), and most recently Tarán and Gutas (2012).

The first edition of the Greek text accepting all four texts as primary witnesses is Kassel (1965), which was recently revised by Tarán (2012) holding that all four of them descend, directly or indirectly, from a single manuscript (Ω) written seven to nine centuries after Aristotle.

Mimêsis is differentiated according to "in which" ("in what", heterois mimeisthai), "what" ("on what", hetera), and "how" (heterós), being translated variously as the means employed (matter, medium), the objects 'mimetised' (subject) and the manner in which the mimêsis is effected (mode, method).

[1447a] I propose to treat of Poetry in itself and of its various kinds, noting the essential quality of each; to inquire into the structure of the plot as requisite to a good poem; into the number and nature of the parts of which a poem is composed; and similarly into whatever else falls within the same inquiry. Following, then, the order of nature, let us begin with the principles which come first.

[2] Epic poetry and Tragedy, Comedy also and Dithyrambic poetry, and the music of the flute and of the lyre in most of their forms, are all in their general conception [3] modes of imitation. They differ, however, from one another in three respects,—the medium, the objects, the manner or mode of imitation, being in each case distinct.

[4] For as there are persons who, by conscious art or mere habit, imitate and represent various objects through the medium of colour and form, or again by the voice; so in the arts above mentioned, taken as a whole, the imitation is produced by rhythm, language, or 'harmony,' either singly or combined.

Thus in the music of the flute and of the lyre, 'harmony' and rhythm alone are employed; also in other arts, such as that of the shepherd's pipe, which [5] are essentially similar to these. In dancing, rhythm alone is used without 'harmony'; for even dancing imitates character, emotion, and action, by rhythmical movement.

[6] There is another art which imitates by means of language alone, and that either in prose or verse—which, [1447b] verse, again, may either combine different metres or consist of but one kind—but this has hitherto been without a name. For there is no common term we could apply to [7] the mimes of Sophron and Xenarchus and the Socratic dialogues on the one hand; and, on the other, to poetic imitations in iambic, elegiac, or any similar metre. People do, indeed, add the word 'maker' or 'poet' to the name of the metre, and speak of elegiac poets, or epic (that is, hexameter) poets, as if it were not the imitation that makes the poet, but the verse that [8] entitles them all indiscriminately to the name. Even when a treatise on medicine or natural science is brought out in verse, the name of poet is by custom given to the author; and yet Homer and Empedocles have nothing in common but the metre, so that it would be right to call the one poet, the other physicist rather than poet. [9] On the same principle, even if a writer in his poetic imitation were to combine all metres, as Chaeremon did in his Centaur, which is a medley composed of metres of all kinds, we should bring him too under the general term poet. So much then for these distinctions.

[10] There are, again, some arts which employ all the means above mentioned, namely, rhythm, tune, and metre. Such are Dithyrambic and Nomic poetry, and also Tragedy and Comedy; but between them the difference is, that in the first two cases these means are all employed in combination, in the latter, now one means is employed, now another.

Tragedy is a mimêsis of a praxis.

[..] [2] Tragedy [..] is an imitation of an action that is serious, complete, and of a certain magnitude; in language embellished with each kind of artistic ornament, the several kinds being found in separate parts of the play; in the form of action, not of narrative; through pity and [3] fear effecting the proper purgation of these emotions. By 'language embellished,' I mean language into which rhythm, 'harmony,' and song enter. By 'the several kinds in separate parts,' I mean, that some parts are rendered through the medium of verse alone, others again with the aid of song.

[4] Now as tragic imitation implies persons acting, it necessarily follows, in the first place, that Spectacular equipment will be a part of Tragedy. Next, Song and Diction, for these are the medium of imitation. By 'Diction' I mean the mere metrical arrangement of the words: as for 'Song,' it is a term whose sense every one understands.

[5] Again, Tragedy is the imitation of an action; and an action implies personal agents, who necessarily possess certain distinctive qualities both of character and thought; for it is by these that we qualify actions themselves, and these—thought and character—are the two natural causes from which actions spring, and on actions again [6] all success or failure depends. Hence, the Plot is the imitation of the action:—for by plot I here mean the arrangement of the incidents. By Character I mean that in virtue of which we ascribe certain qualities to the agents. Thought is required wherever a statement is proved, or, it may be, a general truth enunciated. [7] Every Tragedy, therefore, must have six parts, which parts determine its quality—namely, Plot, Character, Diction, Thought, Spectacle, Song. Two of the parts constitute the medium of imitation, one the manner, and three the objects of imitation. And these complete the list. [..] (1895:23-25)

With respect to critical difficulties and their solutions, the number and nature of the sources from which they may be drawn may be thus exhibited.

The poet being an imitator, like a painter or any other artist, must of necessity imitate one of three objects,—things as they were or are, things as they are said or thought to be, or things as they ought to be. [2] The vehicle of expression is language,—either current terms or, it may be, rare words or metaphors. There are also many modifications of language, which we [3] concede to the poets. Add to this, that the standard of correctness is not the same in poetry and politics, any more than in poetry and any other art. Within the art of poetry itself there are two kinds of faults, those which touch its essence, and those which are accidental. [4] If a poet has chosen to imitate something, (but has imitated it incorrectly) through want of capacity, the error is inherent in the poetry. But if the failure is due to a wrong choice if he has represented a horse as throwing out both his off legs at once, or introduced technical inaccuracies in medicine, for example, or in any other art the error is not essential to the poetry. These are the points of view from which we should consider and answer the objections raised by the critics.

[5] First as to matters which concern the poet's own art. If he describes the impossible, he is guilty of an error; but the error may be justified, if the end of the art be thereby attained (the end being that already mentioned), if, that is, the effect of this or any other part of the poem is thus rendered more striking. A case in point is the pursuit of Hector. If, however, the end might have been as well, or better, attained without violating the special rules of the poetic art, the error is not justified: for every kind of error should, if possible, be avoided.

Again, does the error touch the essentials of the poetic art, or some accident of it? For example,—not to know that a hind has no horns is a less serious matter than to paint it inartistically. [..] (1895:97-99) 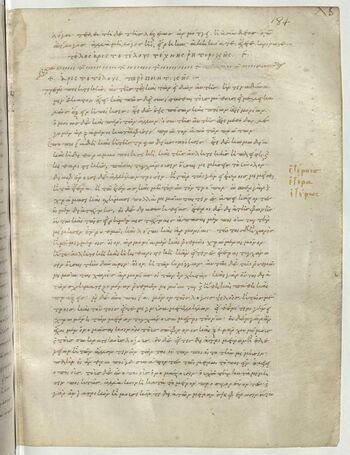 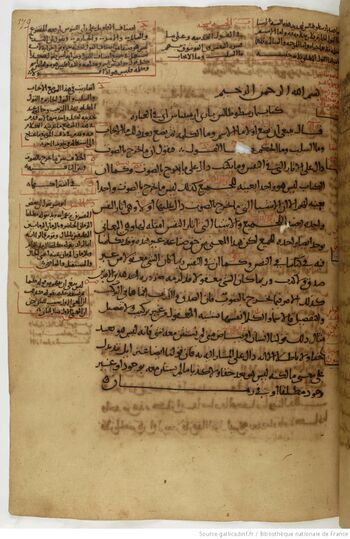