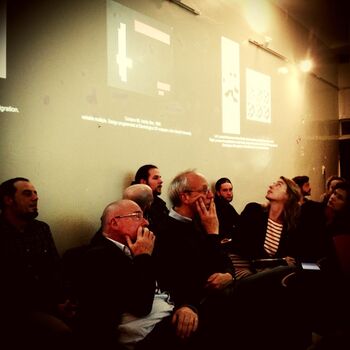 The group Compos 68 was founded by Jan Baptist Bedaux, Jeroen Clausman and Arthur Veen in September 1968 in Utrecht, where all three members studied. Then a student of art history, Jan Baptist Bedaux brought the idea of combining the aesthetics of modernist paintings (as Mondriaan and Klee) and computer simulation of growing trees. Arthur Veen was an assistant of professor A. Lindenmayer who taught philosophy of biology at the Biology department of Utrecht University; Veen was programming in ALGOL in his biological research.

The works Series 1 and Series 2 (both 1968, hand-colored computer-prints made by an Electrologica X8 plotter) were produced by Electrologica X8 Philips computer at the department of mathematics of Utrecht University; the program was written in ALGOL. Bedaux, Clausman and Veen created a system assigning numerical values to 'color' and 'form' in order to obtain numbers for mathematically formulated aesthetic theories. A variable multiple Hobby Box (1969) consists of a package with four colored cardboards, a pin, a variable pattern with stylus (created by the Electrologica X8 plotter) and an instruction manual, both printed as computer sheets. The variable pattern is a computer print that shows an outline of a composition that is to be copied (by pin) to each color cardboard, and such cut rectangles finally assembled at the black cardboard according to a unique computer-programmed composition. This is an early example of participative computer-generated work, introducing the notions of 'manual' and 'user' in the context of computer-generated art (as was the case with do-it-yourself Fluxus multiples).

In its short existence as a group (1968-1969), Compos 68 showed their work at several important international exhibitions of computer-generated art, such as tendencies 4 in Zagreb (1969, receiving an award for Hobby Box) and Kunst und Computer in Vienna. Compos 68 elaborated theoretically on their work in several articles. (source)