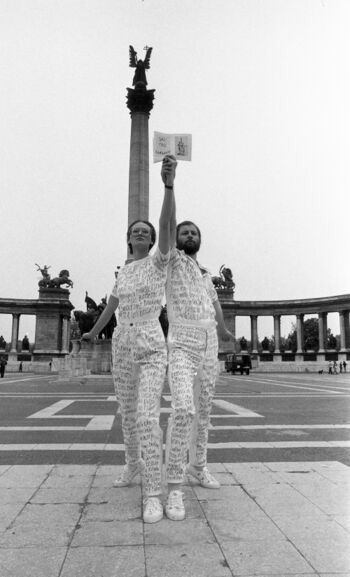 György Galántai (17 June 1941) is a Hungarian neo-avant-garde artist active since the 1960s. He founded the semi-illegal Chapel-gallery in Balatonboglár and Artpool Art Research Center in Budapest.

Born in the small town of Bikács, Gyorgy's home was built by his grandfather, a self-made man of peasant stock and a successful merchant. His grandfather is believed to have disappeared after World War II and his business nationalised. In 1956, he was at Nagydorog, and made placards for the demonstrators. His application to the School for Plastic Art was turned down, but he enrolled at the Technical School for Road Construction in Székesfehérvár. In school, he attended all possible study groups for drawing. Greatly impressed by the works of the Cubists and the Futurists, he was caught up with geometrical shapes. Drawing intricate, inter-penetrating three-dimensional geometric figures and their shadows was his favorite pastime.

In 1960, at the Keszthely Helikon Festival -- a national competition for high school students -- he won first prize in the plastic art category. He also held his first exhibition at technical school, and the next year was awarded a building technician's diploma. He worked as a construction technician till 1963, when he was accepted by the department of painting of the Hungarian academy of fine Arts. After spending some time in other departments -- being deeply interested in printed graphics, molding, mural techniques, applied graphics and croquis -- he also preferred architecture, philosophy and music. He built himself a printer, and took up photography in earnest, and spent most of his free time going to flee markets and antique shops.

In 1966, he came across the abandoned funeral chapel at Balatonboglár while at a summer camp on Lake Balaton. He made friends with the local priest, and decided to rent the chapel as a studio. He graduated in 1967 and decided to be a freelance artist, hoping to make a living doing applied art. In 1968, he signed a 15-year lease with the Catholic Church for the Körmendy Chapel at Balatonboglár. In lieu of rent, he undertook to preserve the chapel.

In 1969, Gyorgy held his first solo exhibition of "psycho-symbolic" and other experimental paintings at the Young Artists' Club (YAC) in Budapest. In 1970, he earned the National Council of Trade Unions Prize for his painting 'Door for Our Descendants' on display at the Debrecen Summer Exhibition. (He shared the prize with Pál Kô.)

But on the way home from the ceremony, he decided to give up painting. From there, he returned to experimenting with graphics -- deconstruction of drawings into graphic elements, collage, montage, prints, photograms -- which he had started doing in 1968.

Between 1970 and 1973, Gyorgy organized and ran the "Chapel Exhibitions" of avant-garde art held all summer in the chapel at Balatonboglár. In all, there were some 35 exhibitions, concerts, poetry recitals, theatrical performances, and film showings were held over these four years, featuring the best of Hungary's (and then considered politically undesirable) avant-garde artists, and guest artists from abroad.

In 1971, he started working on the problem of signs and their meanings.