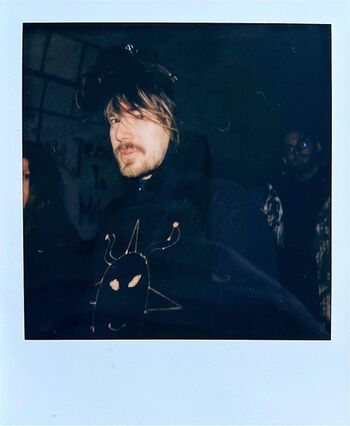 Jonáš Gruska is a sound artist based in Bratislava.

In 2011 he founded a music label and instrument company LOM, which presents East/Central European experimental art and music. Since 2013 he has been organizing ZVUK, an outdoor festival dedicated to experimental music. In 2018 he opened LOM Space, a venue for contemporary sound in Bratislava.

In 2019 he established bioLOM/mykoLOM, a platform for amateur mycology, lichenology and fungal perspectives. He founded the mykoLOM lab with professional equipment for cultivation of fungi. In 2019, he initiated the mykoLOM festival, where art, mycology and foraging intertwine. In 2021 he published a book about lichens growing in the Petržalka district of Bratislava. In 2022 he launched the a portal dedicated to lichens, lisajniky.sk.

Born in Czechoslovakia, Jonáš Gruska studied at the Institute of Sonology in The Hague (The Netherlands) and at the Academy of Music in Krakow (Poland). His main interests are chaotic and polymetric rhythms, unconventional tunings, exploring psychoacoustic properties of sound and field recording. He has created several site-specific sound installations based on the resonant properties of spaces and materials. Gruska has also led workshops on sonification, field recording, electromagnetic listening and programming for artists. He is the creator of Elektrosluch, an electromagnetic listening device. His monikers include Mrkva and Binmatu.