From Monoskop
(Redirected from Sollfrank)
Jump to navigation Jump to search 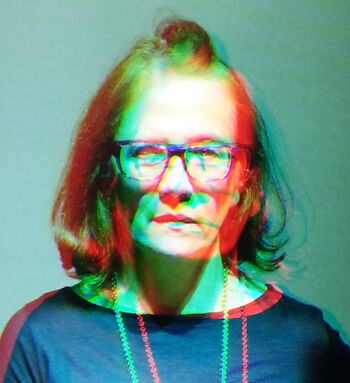 Cornelia Sollfrank is an artist, researcher and author. In the 1990s she was one of the pioneers of net art and an important representative of cyberfeminism; her work focuses on gender and technologies as well as copyright, digital commons, and the performativity of data. She lives in Berlin, Germany.

Cornelia Sollfrank studied painting at the Academy of Fine Arts in Munich (1987-1990) and Fine Art at the University of Fine Arts in Hamburg (1990-1994). Since 1998 she has taught at various universities and art schools and wrote on issues in the nexus of media, art and (gender)politics. In 2011 Sollfrank completed her practice-led research at the University of Dundee (UK) and published her PhD thesis with the title Performing the Paradoxes of Intellectual Property. In addition to her work in the artistic and academic field, Sollfrank gathered experience in the private sector by working as product manager for Philips Media for two years (1995-1996).

Since the mid-1990s, Sollfrank has investigated the worldwide communication networks and transferred artistic strategies of the classical avant-gardes into the digital medium. Her special interest lies in experimenting with new models of authorship, in continuing various forms of artistic appropriation and in deconstructing myths around geniality and originality. In the core of this strand of works is the concept of her net.art generator (since 1998), a computer programme, which re-combines and collages material from the Internet. This project has directly influenced her practice-led research into the field of intellectual property. Related art projects are copyright © 2004 cornelia sollfrank (2004), Legal Perspective (2004), I Don't Know – A conversation between Cornelia Sollfrank and Andy Warhol (2006), MuseumShop (2007) and DÉJÁVU® (2009).

Against the backdrop of gender-specific and institution-critical approaches, a further thematic priority of Sollfrank’s work lies in the creation of forms of organisation (collective, network, collaboration) and communication structures as artistic practices. She was founding member of the collectives frauen-und-technik (Women and Technology, 1992) and -Innen (1994) and initiated and run the world-wide cyberfeminist network Old Boys Network (1997-2001), including the co-organisation of three international conferences on Cyberfeminism (1997, 1999, and 2001). In 2017 Sollfrank launched the project Commons Lab at Studio xx in Montréal, an open usable structure that provided various formats for a collective research process in the overlapping area between +feminism+digital+art+commons+. In 2018 she initiated the technofeminist research group #purplenoise.

Sollfrank also co-edited the readers First Cyberfeminist International (1998) and Next Cyberfeminist International (1999). In her project Female Extension (1997), the hack of the first competition on net.art run by a museum, Sollfrank flooded the museum with 300 virtual, female net.artists. In 1999/2000 Sollfrank produced a series of works on the topic of Women Hackers. Since 2006, Sollfrank re-enacts early feminist performance art in her series Revisiting Feminist Art. With her conceptual music piece Improved Tele-vision (2001/2011) she immodestly inscribed herself in the genealogy of avant-garde artists such as Arnold Schönberg, Nam June Paik and Dieter Roth.

Whilst Sollfrank maintains an active international practice, she also works to support the development of critical Internet culture in Germany. She founded echo, a mailing list for art, criticism and cultural politics in Hamburg (2003) and was co-founder and editor of the online magazine for art and criticism The Thing Hamburg (2006). In 2005/06, she conceived the culture-political intervention Tamm-Tamm–Artists Informing Politicians involving more than 100 artists, based on a dialogical principle.

Since 2012 Sollfrank conducts research in the field of art and commons. Her project Giving What You Don't Have is a series of filmed interviews which introduce relevant projects. This led to the SNF-funded research project Creating Commons, which she conducted together with Felix Stalder and Shusha Niederberger at Zürich University of the Arts.

In 2017 Sollfrank developed a technofeminist comment on the case of Wikileaks and Julian Assange. The lecture performance with the title À la recherche de l'information perdue was presented at the Chaos Communication Conference in Leipzig (2018), at Kunsthalle Bergen (2017), at ICA in London (2018) and at Kling&Bang in Reykjavik (2018).