Selected videos commenting cultural/social/political realities of Middle East and southern and eastern european regions were presented and discussed at the universities, media labs, and art centres, thorough the route starting in Cairo, and continuing via Beirut, Istanbul, Sofia, Belgrade, Sarajevo, Zagreb, Ljubljana, Graz to Vienna, transported by artists in a taxi car.

"..permanently the aim of the project seems to adapt to what the local situation requires often followed by doubts in the actual sense of it.."

Originally planned as a travelling project (2001 to 2004), ended up as a Radio Jeleni / MLOK broadcasting project from Prague Quadriennial in June 2003.

Location aware road-movie from Vienna to Sofia by Michael Aschauer.

Event will revisit this history during the course of five acts, which combines exhibitions with workshops, conferences, hearings, and happenings in the locations of Iceland, Greenland, the Faroe Islands, and the Sámi area of Finland. 56 internationally recognized artists, theorists, politicians, and grassroots activists from all over the world participate in the project. 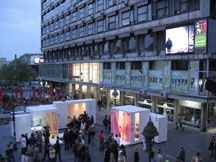 A 40-monitor audio-visual installation of a Istanbul ghetto community created by Turkish artist Kutluğ Ataman will travel up the Danube river from the Black Sea to Vienna, via Rousse, Novi Sad, Vukovar, Budapest, and Bratislava. At each stop, in each country, newly commissioned works will be presented in dialogue with Ataman’s original installation. Along the project there are organized donations for Danube flood victims.

Minority Logbox – multiple degrees of representation. Emanuel Danesch and David Rych will follow Küba’s journey, traveling by car and towing a caravan converted to function as a mobile videotheque. In advance of their departure, they will collect film and video works, representing multiple communities in the eight different countries, featuring ethnic, religious and linguistic „minorities“, but also non-homogenous groups marginalized due to other factors. These films will then be screened at each venue.

A video camera mounted in front of the car driven through the landscape. Programmed to record 1/2 second each 30 seconds, the subsequent recordings allow for a short version of a landscape in motion. The video with sound can as well be traced geographically and thus be viewed as a kind of drawing, as if marking a line, in terms of continuation through different territories. The route taken is the closest possible public available road leading from Spain to Hungary south of the Mediterranean Sea, with a deviation around Palestine, Israel and Lebanon due to current aggressions.