From Monoskop
(Redirected from Dvizheniye)
Jump to navigation Jump to search 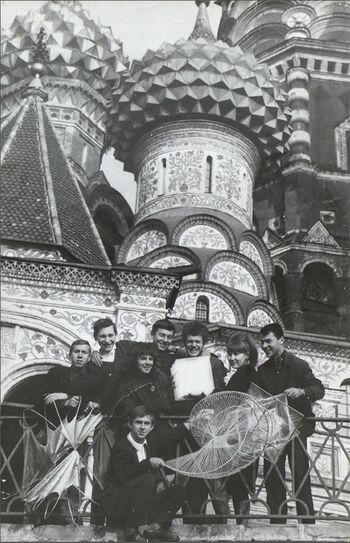 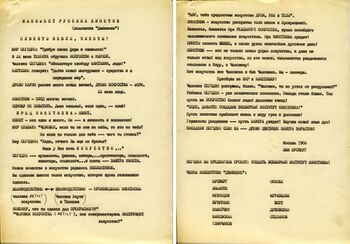 Dvizhenie [Движение, Movement] was an art collective active in Moscow between 1962-1978.

At start of the 1960s, a number of young experimental artists began to convene at a small room in a communal apartment on the outskirts of Moscow, which belonged to Lev Nusberg and was filled with a sizable collection of illegal literature on psychoanalysis, continental philosophy, futurist poetry, albums featuring images of western art and jazz records. Fresh out of the art academy, Nusberg abandoned his early interest in Picasso to pursue his own research into the dynamism of geometric forms. His early works were made of fiber boards painted different colors. He was interested in the concept of symmetry, which he considered a cosmic phenomenon allowing for various elements to coexist in a single composition. It was early in his career that he realized that his geometric constructions, made of crushed eggs cartons and such, shouldn’t just take up the issue of movement in theory, but in practice. The elements of his works began to move around, as did the artist himself as a participant in his own kinetic performances. Eventually, collectively produced industrial optical-reflective sculptures and installations weren’t just moving around their own axis, but they were integrated in his performances and choreographed spectacles. In the meantime, the charismatic Nusberg managed to convince his buddies at the academy to join his collective. One of its new members was Francisco Infante, who was a few years younger than Nusberg. Infante’s approach to the dynamics of geometric forms diverged from the way Nusberg saw them. Infante was fascinated by the idea of infinity, which he considered beyond its cryptic guise as a supernatural phenomenon and, rather, as a phenomenon of movement in space. Hence, in his works, he had a tendency to replicate the same geometric forms multiple times on a varying scale, particularly in his kinetic installations.

These artists used aluminum, plexiglass, mirrors, lightbulbs and other industrial materials, which gave rise to the interpretation of kinetic art as a form of futuristic design. The artists themselves wanted their work to be set firmly in the quotidian, which is why the group took on public projects, such as the decoration of the boulevards and squares of Leningrad of the 50th anniversary of the October Revolution. Many saw it was another instance of the regime inflicting its ambitions upon its artists and it led to several schisms within the group. In addition, some artists, like Infante, were irritated by Nusberg’s dominating personality. In 1966, Nusberg published his Manifesto of the Russian Kinetists, which set the foundation for a scientific-technological revolution that would change the world. Most of the collective’s members didn’t sign the manifesto, distancing themselves further from Nussberg and the group. Dvizhenie ultimately fell apart in 1976, when Nusberg emigrated to Germany, then to the United States. (Source)

In the mid- to late-1960s, the group turned from the suprematist and constructivist systems to more synthetic environments, or “artificial spaces,” which became Dvizhenie’s main focus for the duration of its history. These took the form of functional design (eg. urban designs celebrating the 50th anniversary of the October Revolution in 1966 in Leningrad) and interior design, and outdoor performance (e.g. the Galaxy Kinetic Complex in 1967).

Infante and Koleichuk left the group in the late 1960s. In 1976, Nusberg with part of the group emigrated to France and Germany, and after a few shows it finally broke up in connection to Nusberg's move to the United States in 1980.

"Nusberg tested out constructivist principles, while Infante engaged and explored the influence of Naum Gabo and Kazimir Malevich (hence his utopian, "supreme" projects, such as a skyscape remade along geometric lines). The collective proclaimed kinetic art meant for mass, ecstatic viewing, and created in an urban setting various synthetic wonders, with flashing lights, transparent plastics, screens, mirrors, smoke, and noise pouring out of loudspeakers. For the most part, this ideological design remained utopian, unhindered by the authorities. "The Movement"'s "live machines" continued El Lissitzky's later illusionist project, first by aspiring to hyper-individualism, but also in their critique of "dry" and "one-sided" geometry. Quite predictably, these artists rejected Western kineticism as too individualistic and its construction as moribund. The collective performances directed by Nusberg essentially appealed to the senses and sexuality -- reliable antidotes to geometry. The group dissolved after Nusberg emigrated to the United States; beginning in the 1970s, Infante worked independently, creating conceptual photographs of artificial objects in nature." (source)

"Dvizhenie was the first art group in the Soviet Union that worked with cybernetics. In addition to practicing artists, the group cooperated with actors, musicians, chemists, engineers in radio-electronic and light-technology, psychologists, architects, physicists, poets and performing dancers. The text accompanying their exhibition at the Palace of Culture of the Kurchatov Institute for Nuclear Research stressed the necessity of contiguity between art and science. In future cooperation between art and technology, “art is not to be limited to ornamentation, but to be inculcated in the production processes”. The notion of the participation in the “intensive rhythm of life” as one important task – is reminiscent of a slogan from the 1920s.
The cybernetic art of Dvizhenie has the form of kinetic light-colour-sound environments with “life-transforming” content. In 1967 their Cyberevents was shown in the engineering block of the Peter and Paul fortress in Leningrad, followed by Little Eagle, a cybernetics pioneer game-amusement camp in Odessa, and Cybertheater. The Artificial Bio-Kinetic Environment from 1969, was a utopian virtual reality project presenting a future city of 35-40 million people. Paradoxically enough, Dvizhenie’s members were able to move in the circles both of the extremely official (propaganda produced for international trade shows, military and space research, design for control rooms at airports and big industries) and the in-official (free jazz, long hair, drugs, existentialism and Hemingway) - that the people interested in cybernetics, new technology, design, art, bionic-architecture and future urbanism and city planning frequented.
Dvizhenie was the first group in the Soviet Union that succeeded to produce big exhibitions “without content” from the point of view of Socialist Realism ideology. " (source)