Naum Gabo (born Naum Neemia Pevsner; נחום נחמיה פבזנר) was a Russian sculptor in the Constructivism movement and a pioneer of Kinetic Art.

Born Naum Neemia Pevsner in 1890. Grew up in a Jewish family of six children in the provincial Russian town of Bryansk, where his father owned a factory. His older brother was fellow Constructivist artist Antoine Pevsner. Gabo was a fluent speaker and writer of German, French, and English in addition to his native Russian. His command of several languages contributed greatly to his mobility during his career.

After school in Kursk, Gabo entered Munich University in 1910, first studying medicine, then the natural sciences, and attended art history lectures by Heinrich Wölfflin; gained knowledge of the ideas of Einstein and his fellow innovators of scientific theory, as well as Henri Bergson. 1912 transferred to an engineering school in Munich where he discovered abstract art by reading Kandinsky's 'Concerning the Spiritual in Art'; 1913-14 joined his brother Antoine (who by then was an established painter) in Paris. Gabo's engineering training was key to the development of his sculptural work that often used machined elements. During this time he won acclamations by many critics and awards like the Logan Medal of the arts.

1914 moved first to Copenhagen then Oslo with his older brother Alexei; 1915 made his first constructions under the name Naum Gabo (changed his name to avoid confusion with Antoine); figurative objects in cardboard or wood such as the Head No.2 which was formal experiment in depicting the volume of a figure without carrying its mass. 1917 moved back to Russia to become involved in politics and art, spending five years in Moscow with Antoine.

Contributed to the Agit-prop open air exhibitions and taught at VKhUTEMAS the Higher Art and Technical Workshop, with Tatlin, Kandinsky and Rodchenko. During this period the reliefs and construction became more geometric and Gabo began to experiment with kinetic sculpture though the majority of the work was lost or destroyed. Gabo's designs had become increasingly monumental but there was little opportunity to apply them commenting "It was the height of civil war, hunger and disorder in Russia. To find any part of machinery [..] was next to impossible". August 1920 wrote and issued jointly with Antoine a Realistic Manifesto proclaiming the tenets of pure Constructivism - the first time that the term was used; in it they criticised Cubism and Futurism as not becoming fully abstract arts, stated that the spiritual experience was the root of artistic production, and that art needed to exist actively in four dimensions including time; staged an exhibition on a bandstand on Tverskoy Boulevard in Moscow and posted 5000 copies of the manifesto on hoardings around the city.

In Germany Gabo came into contact with the artists of the de Stijl; 1928 taught at the Bauhaus. During this period he realised a design for a fountain in Dresden (since destroyed). 1924 joint exhibition with Antoine at the Galerie Percier, Paris. 1926 with Antoine designed the set and costumes for Diaghilev's ballet La Chatte that toured in Paris and London. To escape the rise of the Nazis in Germany the pair stayed in Paris in 1932-5 as members of the Abstraction-Creation group with Mondrian.

Gabo visited London in 1935, and settled in 1936, where he found a 'spirit of optimism and sympathy for his position as an abstract artist'. At the outbreak of WWII he followed his friends Barbara Hepworth and Ben Nicholson to St Ives in Cornwall, where he stayed initially with the art critic Adrian Stokes. Whilst in Cornwall he continued to work, albeit on a smaller scale. His influence was important to the development of modernism within St Ives, and it can be seen most conspicuously in the paintings and constructions of John Wells and Peter Lanyon, both of whom developed a softer more pastoral form of Constructivism. In 1946 Gabo and his wife and daughter emigrated to the United States, where they resided first in Woodbury, and later in Middlebury, Connecticut. Died 1977 in Waterbury, Connecticut. 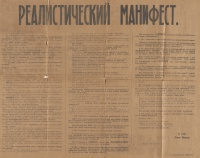 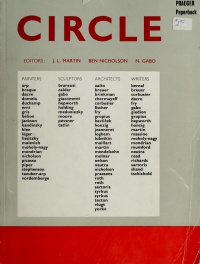 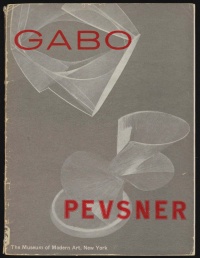 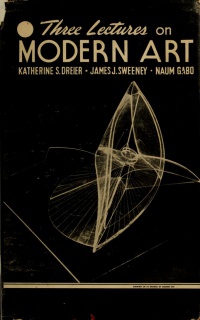