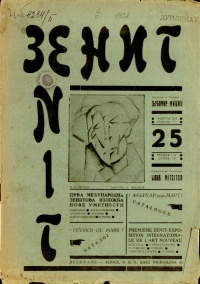 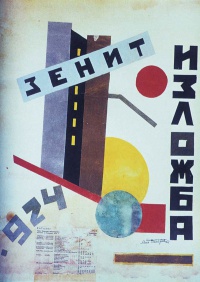 The First Zenit International Exhibition of New Art [Прва Зенитова међународна изложба нове уметности / Du Première Zenit - Exposition Internationale] organised by Ljubomir Micić in April 1924 in the Stanković music school, Belgrade. The establishment of a collection of avant-garde works for Zenit’s gallery, presented to the public at the editorial office of the periodical, first in Zagreb, then in Belgrade, and for a while even in the Paris suburb of Meudon, reflected great social and educational ambitions on the part of Zenit. The gallery advertised the works as "futurism, cubism, expressionism, ornamental cubism, suprematism, constructivism, neoclassicism and the like". This broad scope provided the basis for Zenit's exhibition, featuring more than one hundred exhibits by significant 20th-century artists (Kandinsky, Moholy-Nagy, Lissitzky, Archipenko, Delaunay, Charchoune, Gleizes, Peeters, Zadkine, Paladini, Prampolini and others). Local scene was represented by Balsamadjieva, Katchulev, Bojadjiev, Willink, Hansen, Medgyes, Freudenau, Helen Grünhoff- Elena Gringova, Vilko Gecan, Jo Klek, V. Foretić-Vis, Vjera Biller, M. Petrov, and Branko Ve Poljanski. The exhibition did not receive a lot of publicity, and was therefore not very well attended, but Micić later wrote "No boycott had any effect" – evidently convinced of the purpose and the value of such an undertaking.