Difference between revisions of "Shigeko Kubota" 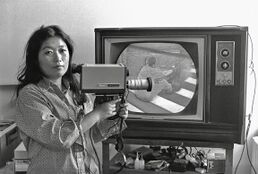 Shigeko Kubota in her studio in 1972. Photo: Tom Haar.

Shigeko Kubota studied sculpture at Tokyo University. After a brief stint as a teacher, she became a well-known multimedia artist of the Tokyo avant-garde scene in the 1960s. In the wake of World War II, Japan came out of its artistic isolation: on the occasion of a visit to the capital, Yoko Ono, then an eminent artist of the New York scene, introduced her home country to Fluxus and other avant-garde movements, while a 1962 performance in Japan by John Cage would make a lasting impression on Kubota. Japanese avant-garde movements such as Gutai and Jikai-Ha appeared during these years. Kubota became a member of the group Ongaku, a collective that experimented with performance, music and visual arts – a common combination at the time. Inspired by Yoko Ono and the Korean artist Nam June Paik, she sent her ideas for happenings to the Fluxus pioneer George Maciunas, who encouraged her to come to New York. Kubota’s first solo show was held at the Naiqua Gallery in Tokyo in 1963, but garnered very little critical attention. After coming to terms with the fact that she had no prospects as a female experimental artist in Japan, she moved in 1964 to New York, where she immediately made contact with major artists of the Fluxus movement (of which she would become vice-president), such as the performer Maciunas and filmmaker Jonas Mekas, with whom she would later work as a curator for the Anthology Film Archives that he founded. She also became an essential link between American and Japanese artists abroad.

Her most famous early pieces include Flux Napkins (1965), paper napkins with cutouts of a face that were used during Fluxus meals; Flux Medicine (1966), a set of pills she invented for Maciunas because he was always ill; and, of course, Vagina Painting (1965), a performance she presented during the Summer Perpetual Fluxus Festival, in which she painted red smears on a sheet of white paper laid on the stage with a large paintbrush attached between her legs. The performance marked the first anniversary of her move to the United States, and affirmed her independence as an artist and woman artist who clearly chose to distance herself from her Japanese roots. However, her artistic career truly began to stand out in the late 60s, first with the appearance of the first portable video camera, the Sony Portapak, which she used immediately, and second thanks to her meeting with Marcel Duchamp. She filmed her first video piece, Marcel Duchamp’s Grave (1972), in Normandy on the site of Duchamp’s grave, as a tribute to the Dada artist. While Duchamp is the inspiration behind her video sculptures – among them Nude Descending a Staircase (1976), the first film acquired by the Museum of Modern Art – Nam June Paik also shared an artistic and personal proximity with Kubota, and the couple were married in 1977. Both artists took part in the other’s projects while they respected each other’s individuality, thus developing an exemplary and egalitarian collaboration rarely seen during the century, except perhaps for Niki de Saint Phalle and Jean Tinguely. She would later devote an entire exhibition and a number of pieces to this exceptional experience, My Life with Nam June Paik (2007). In the 1980s and 1990s, the nature of her relationship to technology became a recurring subject of her video sculptures, while her enduring interest in the condition of women and her desire to confirm her position as a woman artist continued to be a driving force of her work: Jogging Lady (1993), meant to promote exercising as an affirmation of female empowerment, consists of several monitors playing footage of women running marathons, some of which are reflected onto a sculpture of a feminine body.

Kubota belongs to a generation of Japanese women artists (Yayoi Kusama, Yoko Ono, Takako Saito, Mieko Shiomo, Atsuko Tanaka) who brought deep changes not only to the fields of installation, performance art, and video, but also to the relationship between art and music in the 1960s and 70s. As a major artist of the second half of the 20th century, her work is widely featured in museums. She was awarded numerous prizes and grants during her lifetime and has been the subject of several retrospectives. (Source)