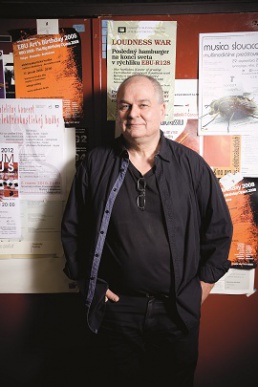 Photo from the archive of Juraj Ďuriš.

Born 1954 in Nitra. Juraj Ďuriš is a composer and radio sound engineer. He graduated from experimental physics at the Slovak Technical University in 1978 and since then he has been working at the Experimental Studio of Slovak Radio in Bratislava as a sound engineer, since 1992 a programme adviser, specialist for electroacoustic and computer music, and currently as its director. He took private composition lessons with Víťazoslav Kubička. He participated in creation of several electroacoustic compositions and produced a number of his own projects. He takes part in several intermedia activities and computer art projects in Slovakia and abroad. He is also the chairman of CECM Bratislava and lecturer at the Academy of Performing Arts in Bratislava.