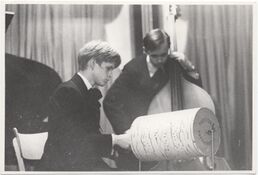 Róbert Cyprich (13 September 1951, Levoča – 1996, Prague) was an experimental poet, performer and art theorist. He collaborated with the Fluxus Center in Nice. In 1969 together with Milan Adamčiak and Jozef Revall he organised the Evenings of New Music in Ružomberok. In 1969 in collaboration with Eugene Brikcius he organised the Time of the Sun happening in parallel in two places, in London and in Ružomberok. He undertook a number of events in collaboration with Alex Mlynárčik (Gardens of Contemplation, 1970) and took an active part in many of his events – “celebrations”. In 1971 he put on an intervention project in a public space in Copenhagen, Porno (Fuck for Peace). In 1972 he took part as an independent at the Venice Biennale with his event Souvenir du présent, with a plan to scatter fake banknotes around Venice. Cyprich was the author of socio-performances, acoustic concepts and concepts of team participatory events. From the 1960s to the 1980s he communicated actively with representatives from Fluxus and action art, distributed samizdat literature and provided information on the alternative arts scene in Czechoslovakia. In the 1970s he developed socio-critical "etudes" in the form of censored books, dictionaries, banners and posters (the book CCC – Censure Cyprich Copyright, 1976-1978). (Source)