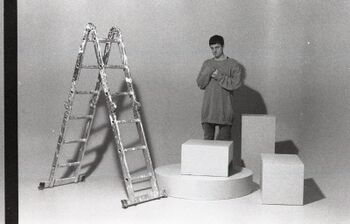 Peter Gonda (aka gnd, 1983) is a theatre director, audiovisual provocateur, VJ, radio host, programmer, and Pure Data-freak. He received his Bc in Applied Computer Sciences (2007) and MA in Cognitive Science (2009) from the Faculty of Mathematics, Physics and Computer Science of Comenius University in Bratislava. He also graduated in theatre direction from the DAMU Theatre Academy in Prague (2018).

He directed the theatre performances Naggnaggg (2011), Endgame (2012), Sarajevo (2013), Neklid (2014), Peklo je taky jenom sauna (2015), Posledný případ Detektíva Konečníka (2015), Sión (2016), Rilato (2017) and ATISMIA (2018), often utilizing casts made out of non-actors or mixed actors / non-actors ensembles. Gnd is also a member of the loose improvisational body of creators of algorithmic music and visual Kolektiv, based in Prague, where he live-codes in environments such as Pure Data and GLSL. His other projects include real-time video synthesis for Bratislava-based experimental electronica projects Poo and 1/x (Daniel Tóth); collaboration on a realtime A/V remake of Brion Gysin's and W.S. Burroughs' works with Michal Cáb and Markéta Cilečková; and Pure Data tools development for Bratislava's P.A.T. Theatre.

He was founding member of BURUNDI media lab (2004-05) and Itchy bit collective with Ana Filip and Michal Čudrnák (2005-). He worked as a speaker, later as editor-in-chief of Tlis radio in Bratislava. From 2007, he advised and developed a free streaming platform for the Slovak Philharmonic Orchestra. Since 2008, together with Dušan Barok he is administrator of the free culture server Sanchez, affiliated with Multiplace network. Together with Lucia Udvardyová he started the Easterndaze project dedicated to exploring young alternative music scenes of CEE countries in 2009, and later co-founded the Baba Vanga tape label to release experimental electronica.

He was born in Košice, lived in Bratislava, in 2010 he moved to Prague.