From Monoskop
(Redirected from Ball)
Jump to navigation Jump to search 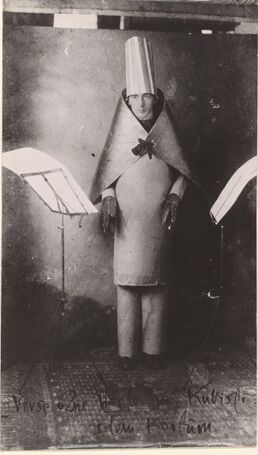 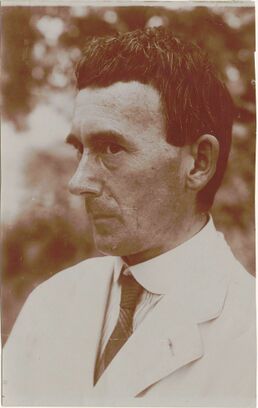 Born into a strict and highly devout Catholic family, Hugo Rudolf Ball was a sensitive child, who grew up fearing the severity of his mother's faith. As a young man, he was apprenticed to a leather factory, but after suffering a nervous breakdown, he was allowed by his family to attend university in Munich and Heidelberg, where he studied German literature, philosophy, and history, and began a dissertation on Friedrich Nietzsche. Describing his search for philosophical meaning as "my problem, my life, my suffering," Ball devoted himself to intense study, reading widely across various systems of thought, including German moral philosophy, Russian anarchism, modern psychoanalysis, and Indian and early Christian mysticism. It was Ball who provided the Dada movement in Zurich with the philosophical roots of its revolt.

From 1910 to 1913 Ball embarked on a career in the theater, first studying acting with Max Reinhardt and then working as a director and stage manager for various theater companies in Berlin, Plauen, and Munich. His ambition was to develop a theater modeled on the idea of the Gesamtkunstwerk—a synthesis of all the arts—that could motivate social transformation and rejuvenation. He also began writing, contributing critical reviews, plays, poems, and articles to the expressionist journals Die Neue Kunst [The New Art] and Die Aktion, both of which, in style and in content, anticipated the format of later Dada journals. In Die Aktion, poems written jointly by Ball and Hans Leybold appeared under the pseudonym Ha Hu Baley. Leybold, a young and rebellious expressionist writer, was one of Ball's best friends and an active influence on his intellectual development. Also important to the formation of Ball's ideas, especially during the Dada period, were Vasily Kandinsky, the abstract painter and leader of the expressionist Blaue Reiter group, and Richard Huelsenbeck, a young doctor and student who would later become central to Dada in Zurich and Berlin, both of whom he met for the first time in Munich in 1912–1913.

In 1914 Ball applied for military service three times and was rejected on each occasion for medical reasons. The trauma he experienced when he took a private trip to the front in Belgium prompted him to abandon the theater and move to Berlin, where he began to delve into political philosophy, especially the anarchist writings of Peter Kropotkin and Mikhail Bakunin. He began writing a book on Bakunin that would continue to occupy him for the rest of his life. With Huelsenbeck, Ball staged several antiwar protests in Berlin, the first of which took place in February 1915 and was a memorial to fallen poets, including Hans Leybold, who had been mortally wounded at the front. Other expressionist evenings hosted by Ball and Huelsenbeck included the kind of aggressive and theatrical readings that would characterize Dada performances.

In mid-1915 Ball and Emmy Hennings, a cabaret singer whom he had met in Munich and whom he would marry in 1920, left Berlin for neutral Zurich. There, in February 1916, after stints with theatrical companies and vaudeville troupes, they opened the Cabaret Voltaire. At the Cabaret, Ball was organizer, promoter, performer, and the primary architect of Dada's philosophical activism. He advocated the intentional destruction and clearing away of the rationalized language of modernity that for him represented all that had led to the "agony and death throes of this age." His poetry was an attempt to "return to the innermost alchemy of the word" in order to discover, or to found, a new language untainted by convention. One of Ball's most innovative poetic forms was the sound poem, a string of noises which, when premiered at the Cabaret in June 1916, he performed with a mesmerizing, almost liturgical intensity. In his diary account of the reading, Ball recorded how his chanting had transported him back into his childhood experience of Mass, leaving him physically and emotionally exhausted.

In July 1916 Ball left the Dada circle in Zurich in order to recuperate in the small village of Vira-Magadino in the Swiss countryside. When he returned in January 1917, it was at the request of Huelsenbeck and Tristan Tzara, who wanted him to help organize Galerie Dada, an exhibition space that opened in March 1917. Events at the Galerie included lectures, performances, dances, weekend soirées, and tours of the exhibitions. Although Ball supported the educative goals of the Galerie, he was at odds with Tzara over Tzara's ambition to make Dada into an international movement with a systematic doctrine. He left Zurich in May 1917 and did not again actively participate in Dada activities.

By the end of 1917 Ball was living in Bern, writing for the radical Die Freie Zeitung [The Free Newspaper], an independent paper for democratic politics. Ball contributed articles on German and Soviet politics, propaganda, and morality. He also returned to his study of Bakunin and prepared a manuscript of his 1915 Zur Kritik der deutschen Intelligenz [Critique of the German Intelligentsia] for publication. The Critique was a virulent attack on Prussian militarism and its effect on German culture that Ball had written partly in response to the nationalistic fervor that gripped Germany during World War I.

After 1920, when he and Hennings moved to the small Swiss village of Agnuzzo, Ball became increasingly mystical and removed from political and social life, returning to a devout Catholicism and plunging into an ambitious study of fifth- and sixth-century Christian saints. He began revising his personal diaries for the years 1910–1921, and in 1927 these writings were published as Die Flucht aus der Zeit (Flight Out of Time). Containing philosophical writings and acute observations of Dada performances and personalities, it remains one of the seminal documents of the Dada movement in Zurich. (Source) 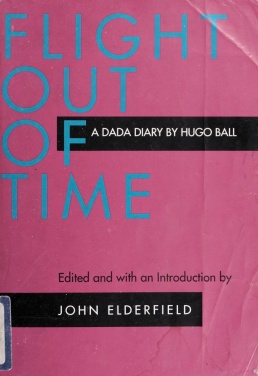