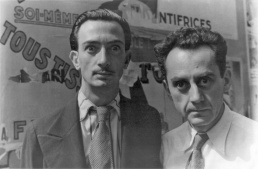 Man Ray (born Emmanuel Radnitzky, 1890–1976) was an American modernist artist (photographer, painter, filmmaker) and a significant contributor to the Dada and Surrealist movements.

Born Michael Emmanuel Radnitzky to parents recently emigrated from Russia, Man Ray grew up in Philadelphia, Pennsylvania, until age seven, when his father moved the family to Brooklyn to take a higher-paying job in a garment factory. In 1908, upon graduating from high school, he began painting, first as an amateur in his parents' living room, and then in classes at the National Academy of Design and the Art Students League. At the suggestion of his brother, the family changed its name to Ray in 1912, after which Man Ray signed his work with that name.

In the fall of 1912 Man Ray began taking classes at the Francisco Ferrer Social Center, or Modern School, a meeting place for New York's cultural and political radicals. In order to support himself, he also worked first at an advertising firm and then for the McGraw Book Company designing maps and atlases, a position he held for six years. In 1913 he moved out of his parents' home and to the artists' colony of Ridgefield, New Jersey, across the Hudson River from Manhattan. There, inspired but overwhelmed by the import of the Armory Show, Man Ray painted primarily in a cubist idiom. In 1915 he published one issue of the Ridgefield Gazook, a proto-dadaist and antiwar broadsheet with anarchist references.

In 1915 Walter Arensberg, a wealthy poet and patron of modern art, took Marcel Duchamp out to Ridgefield to meet Man Ray. In December of that year, Man Ray moved into Manhattan and became involved in the circle of avant-garde artists, writers, and intellectuals gathered around the Arensbergs. Over the next four years his work ranged over a variety of media, from painting, collage, and found sculpture to airbrush, photography, and film. He produced enigmatic abstractions out of the most common materials, such as the coat hangers used for the 1920 work Obstruction, and with the most technically advanced tools, such as the commercial airbrush machine, which he used to make abstract paintings he called "aerographs."

In April 1920 Ray had three works shown at the first exhibition of the Société Anonyme, an organization for modern art that he and Duchamp helped Katherine Dreier to establish, and in 1921, he and Duchamp published the only issue of New York Dada. Several months after it appeared, Man Ray wrote Tristan Tzara, complaining that "Dada cannot live in New York. All New York is dada and will not tolerate a rival, will not notice dada." He followed Duchamp to Paris shortly thereafter.

Before he even arrived in Paris, some of his works had been shown at the June 1921 Salon Dada at the Galerie Montaigne. About six months after his arrival, he had a one-person show at the Librairie Six bookstore, with a catalogue to which all of Dada's major players in Paris contributed, including Paul Eluard, Louis Aragon, and Tzara.

In Paris, Man Ray continued to experiment with photography, which he had begun in New York, documenting his and Duchamp's works and using the camera to record everyday life and objects from unusual angles. In early 1922, probably after Tzara showed him the cameraless photograms made by Christian Schad, Man Ray began to produce his own photograms, calling them "Rayographs" or "Rayograms."

Man Ray's experiments with photography, which often produced mysterious and dis-turbing, sexually charged images, brought him into the center of surrealism in Paris in the 1920s. He also became renowned for contributions to the fashion magazines Harper's Bazaar, Vu, and Vogue, for which he photographed during the 1920s and 1930s. Man Ray continued to live in Paris until 1940, when the war forced him to return to the United States. He lived in Hollywood until 1951; he then returned to Paris, where he spent the remaining years of his life. (Source)