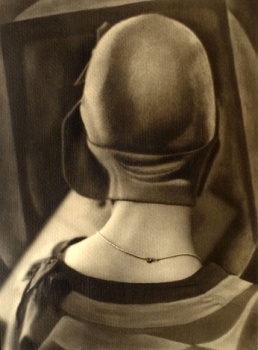 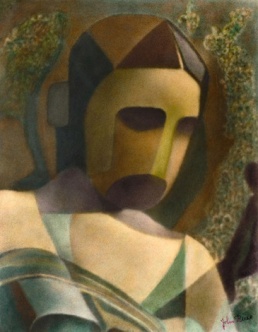 John Olav Riise worked as a professional photographer from the 1920s up till 1950s. His work utilised aspects of Cubism, Surrealism, Expressionism, Abstraction and Neo-Classicism of Ingres; combined up to five negatives in one photograph and used hand-applied colours. He participated annually at The International Salon of Photography in Paris from 1924 to 1932. In 1948 he began painting, participating in the Autumn Exhibition in 1970. [46] [47] [48] [49]

Oslo's Fotogalleriet held an exhibition of his work in 1994. In 2006, Henie-Onstad Art Centre mounted his retrospective, which traveled to New York the next year[50], and was followed by another one in 2011[51].

Jean Heiberg lived in Paris in 1905-12. He got acquainted with Fauvism and Cubism, and was the first of a number of Norwegian painters who studied under Henri Matisse (1908-10). He is also known for one work in industrial design: when he returned to Norway in 1929, he was commissioned to design a bakelite telephone terminal for Elektrisk Bureau (up till then, telephones had been made out of metal; bakelite was invented in 1909 by Leo Baekeland). Heiberg had produced the huge painted plaster prototype, however it proved to be too difficult to cast in bakelite; and the later model had smooth surface and sharp edges. The phone went into production in 1932 as the Ericsson model DBH 1001, and is claimed as the world's first "hookless" bakelite telephone, that is the first telephone where the cradle, or receiver hook, was integrated into the all-bakelite body. The engineering design of this model was made by Johan Christian Bjerknes. The model was sold throughout Scandinavia, in Britain, Italy, Greece and Turkey, and (through Siemens) in France and the USA; staying in production for over twenty years. See also 25-minute documentary from Arte TV. [53] [54] [55] [56]. Heiberg's works at DigitaltMuseum.no.

Rolf Nesch was born in Germany, and moved to Norway following the Nazi takeover in 1933. Inspired by Norwegian scenery and working life, he discarded canvas and paintbrushes [57] for good, and turned to printmaking. He developed his own techniques for metal prints [58] and so-called Snegraffik [material pictures] [59], for which he used a range of materials: metal plates, copper wire, wood, stone, glass, mica, rope, nails, and so on. His metal prints include Elbe Bridge I (1932), Snow (1934) in a series of 20 (black and white), 21 metal prints of fisheries off the Lofoten Islands (1936) [60], 10 metal prints inspired by poems of Henrik Rytter (1937); and others. Material pictures [Snegrafikk]: Double Lion of Babylon (1934), Reclining Woman (1934), both large zinc plates with metal wire soldered to them; the three-part Music (1934-35); the high relief and abstracted figures of Peace (1935-36) whose theme is the 1915 Eastern Front; etc. He also created distinctive sculptures, mostly figures in stone and bronze [61]. 1938 saw his first exhibition of material pictures, held at the premises of Kunstnerforbundet in Oslo. Nesch's metal-plate technique is described by Sidsel Helliesen of the National Museum; Eivind Otto Hjelle writes about his material pictures. His work provided inspiration for the abstract artist Olav Strømme and many other Norwegian Modernists in the 1930s.

Cover of a compilation with the works by Nordheim, Janson and Fongaard, 1968. [18]

Marius Heyerdahl studied with George Grosz in New York and at the University of Berkeley, followed by studies and long stays in Sweden, Nigeria, Iraq, England, France and Italy. His work raised concern about the earth's elements, industrialised man and his relationship with nature; Heyerdahl warned against the destruction of nature in his writings and 'technological monsters' made of industrial waste such as parts of canons, cooling system of jet motors or of wasching machines. Golem, 240 cm high burnt iron skeleton with a gas mask, was shown at the UKS Spring Exhibition in 1965, and the same year his Homo Cyberneticus I and II appeared at the special section of the prestigious Autumn Exhibition [122]. Later he created Lucifer (1967), a grinning cow skull. The installations were standing still or moving, producing light signals and mechanical sounds. [123]

Situationist-influenced Gruppe 66 made some of the first action art and happenings in Norway. Its events saw a mix of poetry, new music, jazz, films, Co-ritus, concrete music, Laterna Magica shadow and puppetry theatre performances using light projection and slides, and participatory events. The motive forces behind the initiative were Jens Jørgen Thorsen from Copenhagen and Lars Grundt. The group was inaugurated at a "living" exhibition in March-April 1966 [124], followed by another ground-breaking exhibition Konkret Analyse in October 1970, both at Bergen Fine Art Association [Kunstforeningen]. The latter exhibition also involved public debates with politicians.

In 1971, Gruppe 66 members were among the founders of Gruppe Lyn. This group presented their conceptual and process art works in Oslo Fine Art Society in 1972 – an exhibition that attracted attention and was seen as a breath of fresh air and radically new in the Oslo area. Gruppe Lyn was a pragmatically oriented group without a shared philosophy, founded by Bård Breivik, Stein Rønning, Gerhard Stoltz, Bjørn Krzywinski, Birger Larsen and Arvid Pettersen. They shared workshops and studios and ran the self-organised Galleri 1, later known as Hordaland Artist Centre. [125]

A group of artists from Bergen, centred around former members of Gruppe 66, initiated a grand collaborative project that aimed to ask, and answer, all of the taboo questions around sexuality, gender, sexual and reproductive health, pornography and sexual politics. Working with medical students, art students, and radical social theorists of all kinds, they produced an 'information exhibition', Samliv. The exhibition opened at Bergen Fine Art Association in January-February 1977 and toured to Tromsø and to Kunstnernes Hus in Oslo. It was both highly controversial, and highly successful, with over 70,000 visitors. [126] 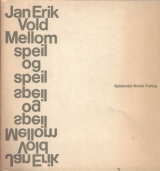 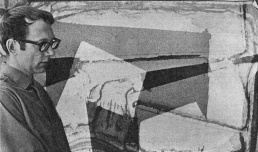 Rolf Aamot with a theme for his visual composition Constellations I, 1967. [26] 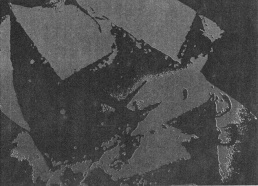 Since 2007, the artist-run space Atopia in Oslo has been conducting a long-term three-part research Retrospective: Film and Video Art in Norway with Farhad Kalantary as project leader. Researchers include Synne Holst-Pedersen, Linn Lervik and Tone A. Gellein. The first part, which focused on the works produced between 1960 and 1990, resulted in a large-scale exhibition at the Stenersen Museum in 2011 (see above). The second part focuses on the 1990s with a series of exhibitions (2013). [167]