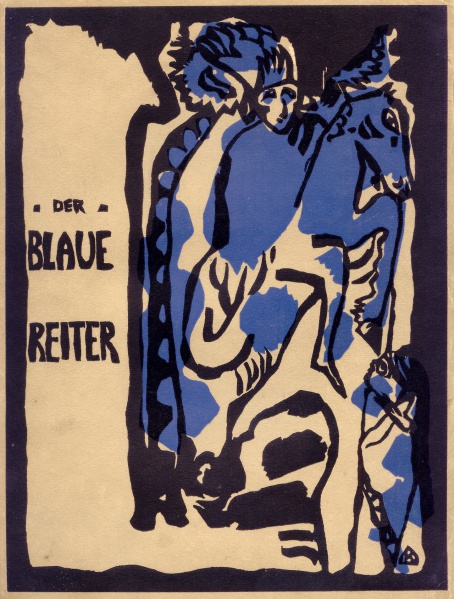 Der Blaue Reiter [The Blue Rider] was initiated in 1911 by the young painters Wassily Kandinsky and Franz Marc and was active until 1914. Conceived in June 1911 and published in Munich in May 1912, Der Blaue Reiter (Almanach) [The Blue Rider Almanac] presented their synthesis of international culture to the European avant-garde at large.

The Almanac was published in an edition of 1100 copies. Its costs were underwritten by the industrialist and art collector Bernhard Koehler, a relative of August Macke. It contained reproductions of more than 140 artworks, and 14 major articles. A second volume was planned, but the start of World War I prevented it. Instead, a second edition of the original was printed in 1914.

The contents of the Almanac included:
* Marc’s essay “Spiritual Treasures,” illustrated with children’s drawings, German woodcuts, Chinese paintings, and Pablo Picasso’s Woman with Mandolin at the Piano
* an article by French critic Roger Allard on Cubism
* Arnold Schönberg’s article “The Relationship to the Text”, and a facsimile of his song “Herzgewächse”
* facsimiles of song settings by Alban Berg and Anton Webern
* Thomas de Hartmann’s essay “Anarchy in Music”
* an article about Alexander Scriabin’s Prometheus: The Poem of Fire
* an article by Erwin von Busse on Robert Delaunay, illustrated with a print of his The Window on the City
* Macke’s essay “Masks”
* Nikolai Kulbin’s essay “Free Music”
* Kandinsky’s essay “On the Question of Form”
* Kandinsky’s “On Stage Composition”
* Kandinsky’s The Yellow Sound.

The art reproduced in the Almanac marked a dramatic turn away from a Eurocentric and conventional orientation. The selection was dominated by primitive, folk, and children’s art, with pieces from the South Pacific and Africa, Japanese drawings, medieval German woodcuts and sculpture, Egyptian puppets, Russian folk art, and Bavarian religious art painted on glass. The five works by Van Gogh, Cézanne, and Gauguin were outnumbered by seven from Henri Rousseau and thirteen from child artists. (from Wikipedia)