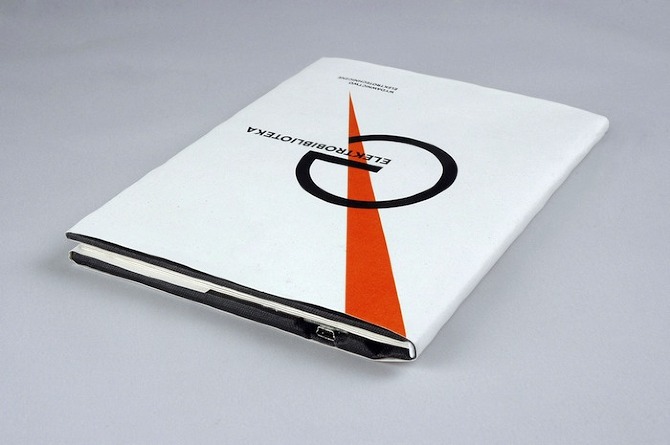 Author: “I was interested in the phenomenon of a book perceived as a kind of interface, which has influenced the way we deal with information. I also wanted to shift the experience typical for print design to the field of digital media. One of the major inspirations was the manifesto ‘The topography of typography’ published in 1923 by a graphic designer El Lissitzky, who has expected a book to be replaced with something he called “electrolibrary”. It seems that his predictions came true.

The final result of the project is the paper book that can be connected to the computer via USB cable. It is able to physically detect which page is currently open and send that information to the Electrolibrary website. By turning pages or touching given illustrations you can navigate through the website and get additional information such as hyperlinks, quotations, movies etc. Of course you can also unplug the cable and read it like a normal book.

The book was intended to be a single object, just for presentation. The great interest in my project that I encounter surprised me. I did not expect that at all, so maybe this project can be developed further.” (source)

The reinvention of the real through critical practices of remix, mash-up, re-contextualization, reenactment

Romaeuropa FakeFactory is an act of artistic and technological hacking, a platform for global discussion and a performance that, beginning in 2009, has dealt with the themes of active, critical and creative innovation, confronting the management of cultural and technological policies related to these areas. The story begins with the opening of the Romaeuropa WebFactory, a digital art competition launched in 2008 by the Romaeuropa Foundation (Fondazione Romaeuropa) and Telecom Italia. Oppressive copyright conditions, such as the unilateral transfer of the rights to the works submitted and a ban on the use of techniques like mashup, cutup, remix but conversely giving the Romaeuropa Foundation and Telecom Italia the right to remix the works, inspired the creation of a Fake capable of becoming a point for multi-disciplinary analysis of the possibilities offered by freely available knowledge, contents and resources: a chance to reverse the logic of the competition and bring to light the contradictions, limits and implications of such a typical, reactionary cultural policy.

“Remix the world! Reinvent Reality!” is one of the principal themes that has inspired the REFF, from an act of détournement and cybersquatting – that brought to life the creation of a remix skills competition determining in 2009 a reversal of the Romaeuropa Foundation and Telecom Italia’s policy on the management of intellectual property rights – to the presentation of REFF’s instances and methodologies to the Cultural Commission of the Italian Senate (Commissione Cultura del Senato della Repubblica Italiana), up to the current production of the REFF book, as a global effort to create a working business model that implements the concepts and demands expressed by the RomaEuropa FakeFactory. Supporters of the REFF are found all over the world: over 80 partners among universities, artists, academies, associations, hackers, researchers, designers, journalists, politicians, magazines, networks, activitst, art critics, architects, musicians and entrepreneurs together with all the people who share a belief that art, design and new technologies can unite towards a critical, yet positive vision of a world that can create new opportunities and new ways of being, collaborating and communicating.

English version to be published soon.