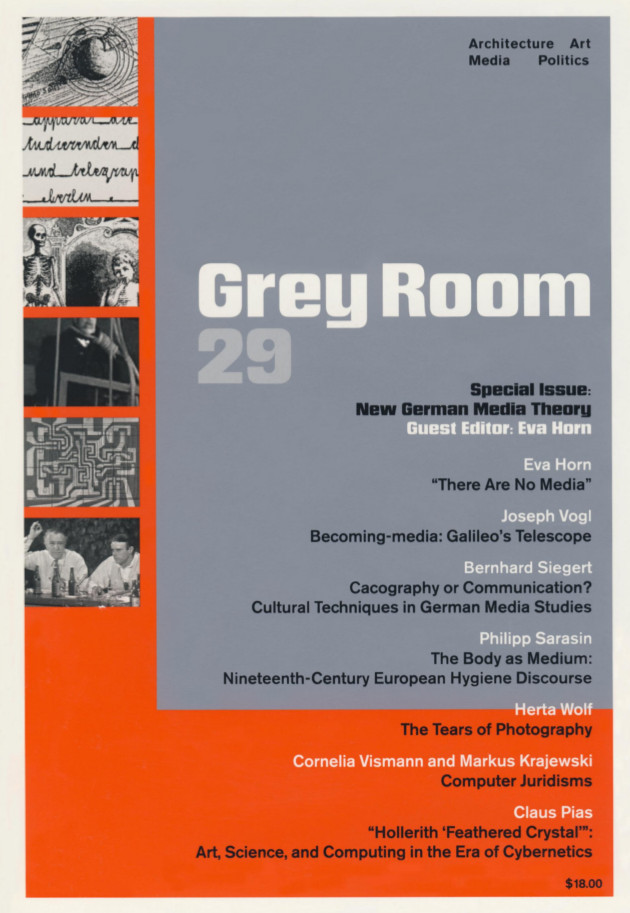 “If asked for a definition of ‘media,’ the answer given by the authors included in this volume would likely be ‘Es gibt keine Medien’–‘There are no media.’ In 1993, Friedrich Kittler published the essay ‘There Is No Software.’ Three years later, Bernhard Siegert attacked one of the fetishes of the burgeoning German media studies of the 1990s by declaring that ‘There are no mass media.’ Such a dismissal of some of the core concepts of media studies–including any fixed concept of ‘media’ itself may well be the signature of the type of ‘new media theory’ presented by the modest collection of essays in this volume.” (from the Introduction)

Computational Aesthetics is a term which has been frequently used by scientists interested in quantitative approaches towards the concept of aesthetics during the last century. A review of both past and recent works attempting to quantify aesthetic preference of various stimuli is given, which shows that aesthetics was described as some function of complexity and order in many theories.

Since most measures were hardly relating to knowledge of human perception, complexity is reinterpreted in the context of a currently accepted model of visual perception and a hypothesis is formulated which states that human visual preference is not independent of complexity (cell excitation) at the very first stage of visual processing.

An estimate representative for cell activity in early visual processing is presented: Multivariate Gabor Filter Responses. Additionally, image properties such as aspect ratio, resolution and JPEG compressibility are used to sanity-check any correlations.

The estimate calculated, compared against human preference ratings of photographs, shows statistically significant but low correlations. However, the machine learning experiments performed, fail to predict any better than one would by taking the mean value of the data.

Even though these results only loosely relate to aesthetic perception, it’s motivating further research and closer inspection of image features and their relation to perceptual properties and visual (aesthetic) preference.