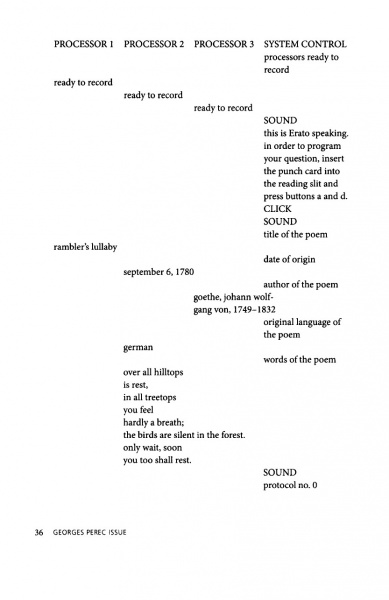 One of Georges Perec’s Oulipian works, the radio play The Machine was written “in collaboration with his German translator and close friend, Eugen Helmle, in the heady atmosphere of the Saarbrücken literary circle that met at Helmle’s house. The Machine is an early example of writing inspired by the existence of modern computers (Perec’s other computer-simulation, a stage play entitled [L’Augmentation, appeared in English as The Art of Asking Your Boss for a Raise in 2011]). It pretends to analyze and recompose, demolish and then rebuild a short lyric by Goethe that is almost indescribably well-known to all speakers and learners of German. To do this, it uses pretty much all the rewriting devices invented to date by Oulipo, and at the outset of Perec’s apprenticeship to a group that included many scientists and mathematicians far more learned than he, it served as a kind of demonstration piece, or Meisterstuck. Its inventiveness, irreverence, and closing sadness has made it just about the best-loved and most frequently rebroadcast example of the Neues Hörspiel, the name given to the experimental reinvention of radio drama that was such a marked feature of German literary culture in the 1960s and 1970s. Perec is nothing it not international.” (from David Bellos’s Introduction to the Review‘s special issue)