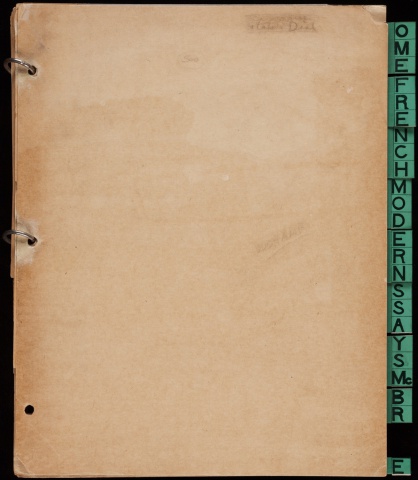 A collection of essays by the art editor and critic Henry McBride, published in the New York Sun and the New York Herald, 1915-1922, compiled and designed by Marcel Duchamp.

“In 1922, Henry McBride, who had been close to Duchamp for years, commissioned him to design a book for his art essays. The resulting pamphlet was composed of eighteen cardboard sheets, held together by three rings. Its title, Some French Moderns says McBride, is spelled out in twenty-seven separate file tabs attached to the right edge of each page; when viewed from the verso, these same tabs spell out the name of the book’s publisher: ‘SOCIÉTÉ ANONYME INCORPORATED’.” (from Marjorie Perloff, “A Cessation of Resemblances”, 2012)

Duchamp described his idea for layout in a June 1922 letter to McBride: “The brochure would have 26 or 27 pages (front–back) since each letter is on a page of its own. Now, if I have enough room, I propose the following: Set off on the first page with minute characters, ending up on the last page with big characters, making the characters progressively larger with each page. [..] I have already chosen the typeface ranging from 5 pt for the first page to 12 or more for the last page which will have 5 words (I think). With each page, the typeface, from the same family, will gradually increase in size. The first two articles on Cézanne will have to be read with a magnifying glass.” And about the illustrations: “My idea is to incorporate them into the text by gluing them onto the binding strip. I think it will be better to spread them out.” (from Duchamp, Selected Correspondence, 2000).