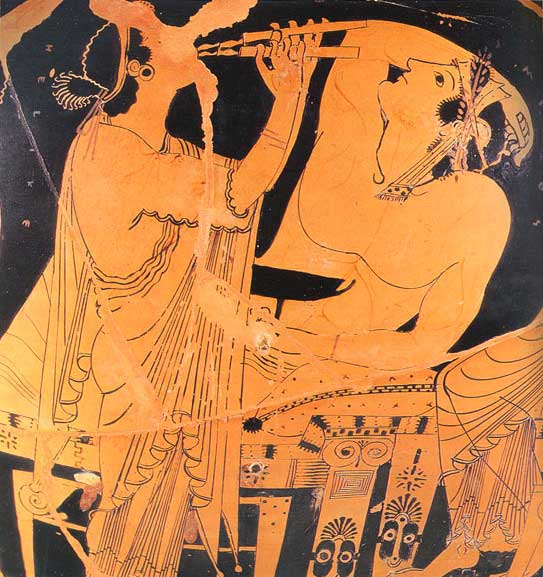 “These are the works of an unnamed flute-player who claims to have been present at Plato’s death. The writings, discovered only recently, appear in a transdisciplinary format and are a bit of an enigma. The works provide, regardless of their unusual nature or validity as a witness account, a surreal portrait of, and engagement with, the person of Plato.

Provisionally, the Aulos-girl Papers are compelling for us in two ways: 1. they, like Plato’s authorship, problematize the affairs of the beautiful political soul, and give a fragmented account of how to give birth to a concept (called variously in the text: a boy, a sacrifice, a god, a thing), and 2. though cryptic, they suggest that with our western tradition of philosophy being indebted, and largely footnotes, to Plato, we may also be aligned with Plato’s original debt in service of the esoteric midwife and mimetic twin of Apollo: Artemis, ‘an investigator of virtue.’

We are invited to an acknowledgement and recovery of Plato’s Artemisian tendencies, concepts and values, including the deep problems and responses that are available from such efforts. The recovery interests us mainly because it involves a subtle shift in orientation for philosophical inquiry. A basic move from homopolon (harmony) and haploun (single-mindness or truthfulness) – all Apollonic branches, to those of Artemis: parthenia (virginity, maidenhood, fullness of life), artemes (soundness) and aretēs histōr (investigator of virtue).” (from the introduction)