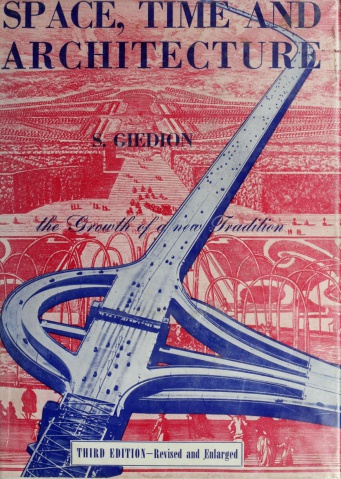 A milestone in modern thought, Space, Time and Architecture has been reissued many times since its first publication in 1941 and translated into half a dozen languages. It is a pioneering and influential standard history giving in integrated synthesis the background and cultural context of modern architecture and urban planning, set in their manifold cultural relationships “with other human activities and the similarity of methods that are in use today in architecture, construction, painting, city planning and science.”

The book had its genesis in the Charles Eliot Norton Lectures at Harvard University in the spring of 1938, and it was recognized from the outset as a series of related essays on seminal topics in the organization of human spaces, obtaining fresh insights, not from a panoramic survey, “but by isolating and examining certain specific events intensively, penetrating and exploring them in the manner of the close-up” as Giedion outlined his method. (from Wikipedia)