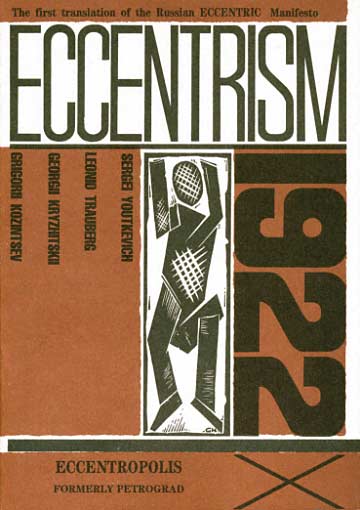 “The ‘Depot of Eccentrics’ which on the 9th July 1922 published The Eccentric Manifesto–a pamphlet ‘the size of an ordinary letter’–proved an ephemeral collaboration. In the words of subsequent critics, ‘difference of opinion’, ‘stern criticism’ caused its dissolution soon after The Factory of Eccentric Actor’s first productions–a stage version of Gogol’s The Wedding (1922) and a Cocteau inspired piece in three acts, Foreign Trade on the Eiffel Tower (1923).

A great rarity, the manifesto itself does not seem to have been any more influential than the ‘depot’ which published it. Containing four articles–by Leonid Trauberg, Grigori Kozintsev, Sergei Yutkevich and professional gambler Georgii Kryzhitskii–its post-civil war Petrograd print issue was limited to 1000 copies. Of these ‘a majority’ were entrusted by Yutkevich to Pravda critic Khrisanf Khersonsky to spread around Moscow ‘using his contacts’. Sales went badly however and the whole stock was dumped in Khersonsky’s basement where, when the house caught fire, it was ‘completely destroyed.’

[…] Kozintsev and Trauberg later made the film New Babylon (1929), subtitled “Assault on the Heavens–episodes from the Franco Prussian War and the Paris Commune 1870-71”, based less on Karl Marx than on the history of the Paris Commune written by P.O. Lissagaray. [The screenings were accompanied with an ensemble playing a score by Dmitri Shostakovich]. … In later years Shostakovich was to claim that ‘my troubles on the political front began with New Babylon.'” (from the Introduction)

First published in Russian in St Petersburg, 1922
Translated and with an Introduction by Marek Pytel
Cover by Clifford Harper
Publisher Eccentric Press, London, 1992
22 pages
via Reality

Entry on Factory of Eccentricity in Saint Petersburg Encyclopedia (in English)