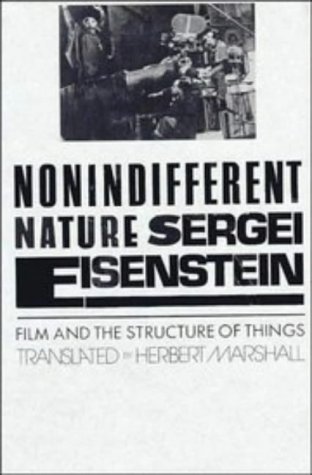 “This is the first publication in English of Eisenstein‘s major theoretical work from the last decade of his life. Almost completed but unrevised at the time of his death in 1948, it comprises three articles from 1939-41 rewritten for the book, together with a substantial text from the period 1945-47. More than a treatise of film theory (though its immediate impetus is clearly the films that Eisenstein worked on at this time, Alexander Nevsky and Ivan the Terrible Parts I and II), Nonindifferent Nature aspires to the status of a contribution to general aesthetics, and its numerous examples are drawn more from the other arts than from cinema. Indeed, apart from analysing, in retrospect, his own work, Eisenstein scarcely touches on film at all. Instead he deals with the novel (Zola, Tolstoy, Wilkie Collins), painting (El Greco, Chinese landscapes), architecture (Chartres Cathedral, Mayan temples), etching (Piranesi), opera (Wagner), poetry (Pushkin), acting (Frederick Lemaitre), music (Bach, jazz), even cartooning (Saul Steinberg).” (from a review by Russell Campbell)