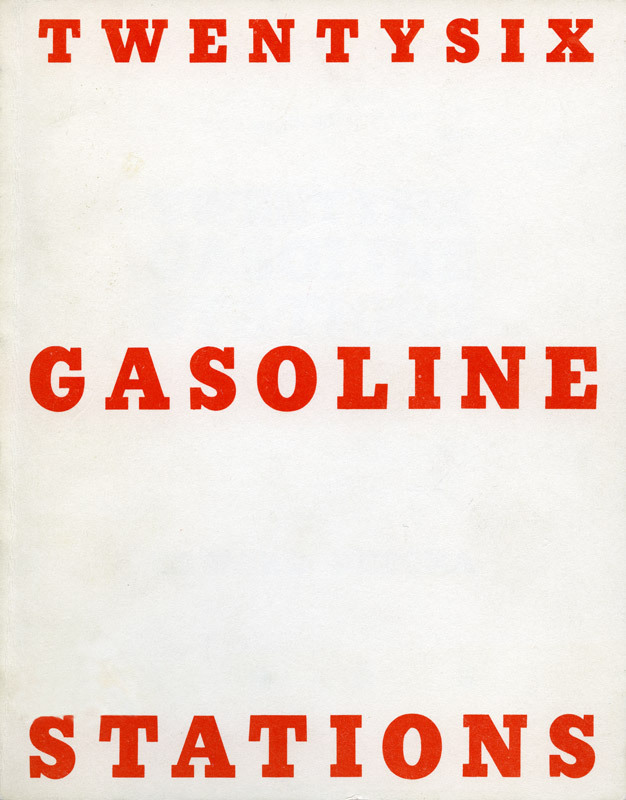 “Twentysix Gasoline Stations is the first artist’s book by the American artist Ed Ruscha. Published in April 1963 on his own imprint National Excelsior Press, it is often considered to be the first modern artist’s book, and has become famous as a precursor and a major influence on the emerging artist’s book culture, especially in America. The book delivers exactly what its title promises, reproducing 26 photographs of gasoline stations next to captions indicating their brand and location. From the first service station, ‘Bob’s Service’ in Los Angeles where Ruscha lived, the book follows a journey back to Oklahoma City where he had grown up and where his mother still lived. The last image is of a Fina gasoline station in Groom, Texas, which Ruscha has suggested should be seen as the beginning of the return journey, ‘like a coda’.

Originally printed in a numbered edition of 400, a second edition of 500 was published in 1967 and a third of 3000 in 1969. Neither of these later editions was numbered. It has been suggested that these reprints were a deliberate attempt to flood the market in order to maintain the book’s status as a cheap, mass-produced commodity. The book originally sold for $3.50. Of the work, Johanna Drucker said:

‘Ruscha’s books combined the literalness of early California pop art with a flat-footed photographic aesthetic informed by minimalist notions of repetitive sequence and seriality….Thirty years later, with a quarter of a century of mainstream artworld activity between, the aspect of shock-effect and humor has diminished somewhat. But in 1962 (sic) this work read against the photographic landscape of highly aestheticized image-making work which carried photography’s claims to art status forward on the double engines of fine at imagery and/or humanistic critical vision (the Edward Weston, Ansel Adams tradition on the one hand and the Dorothea Lange, Walker Evans tradition on the other).'” (from Wikipedia)