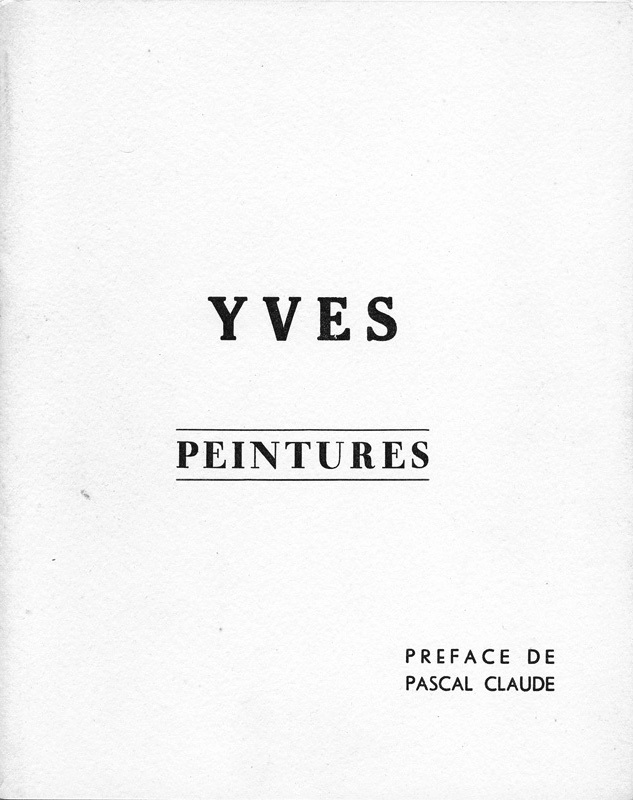 This publication was Yves Klein’s first public gesture as an artist, featuring pages of “commercially printed papers” that were seemingly reproductions of paintings that, in fact, didn’t exist.

The booklet was produced by the engraving workshop of Franco de Sarabia in Madrid. The foreword, signed by Pascal Claude – his friend Claude Pascal – is composed of black lines instead of text. Ten vivid monochromatic plates follow, mechanically signed ‘Yves’, each given unspecified numerical dimensions and assigned a city: Madrid, Nice, Tokyo, Paris, and London. If, as is usual in exhibition catalogues, the dimensions refer to centimetres, the plates would represent medium sized easel paintings; if metres, large frescoes; if millimetres, then the plates are life size, leading to the conclusion that, rather than illustrations, they are the work itself. Klein would later create work in all three categories.

In a manuscript dated 13 January 1955, Yves Klein writes: ‘Last night, Wednesday, we went to an abstract cafe […], the abstracts were there. They are easy to recognize because they give off the air of abstract paintings and their paintings become visible in their eyes. Maybe I have illusions, but I feel like I can see it all. Anyway, we sat down with them… Then we got around to talking about the book Yves Peintures. Later on, as they insisted that I show it to them, I went to get it from the car and threw it on the table. Already, right from the first pages, the eyes of the abstracts changed: they lit up and deep down appeared the beautiful and pure unified colors.’

In October 1955, Klein exhibited for the first time his colored monochromes (orange, green, red, yellow, blue, pink) under the same title Yves Peintures at the Club des Solitaires in Paris. (based on source)