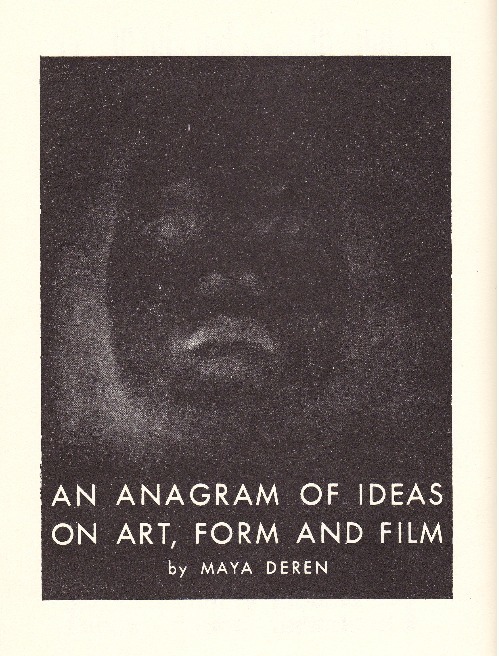 “Maya Deren’s four 16 mm. films have already won considerable acclaim. Convinced that there was poetry in the camera, she defied all commercial production conventions and started to make films with only ordinary amateur equipment. Her first, MESHES OF THE AFTERNOON (1943), was made with her husband Alexander Hammid, whose films–FORGOTTEN VILLAGE, CRISIS, HYMN OF THE NATIONS (Toscannini) and others–reveal also that devotion to the poetry of vision which formed the common ground of their collaboration. When other work claimed his time, Maya Deren went on by herself–conceiving, producing, directing, acting, (being unable to afford actors) photographing (when she was not in the scene) and cutting. Through all the trials of such shoe-string production, which included carrying equipment for miles to the location, she had only assistance of another woman, Hella Heyman, as camerawoman. Yet three more films were made: AT LAND, A STUDY IN CHOREOGRAPHY FOR CAMERA (with Talley Beatty) and RITUAL IN TRANSFIGURED TIME, thus proving that fine films could be made “for the price of the lipstick in a single Hollywood production.” Her heroic persistence has just been rewarded by a John Simon Guggenheim Memorial Foundation Fellowship. Moreover, the reputation of the films has spread so that performance at the Provincetown Playhouse were completely sold out and they have also been shown in colleges and museums throughout the country.

In this pamphlet Maya Deren’s approach to film reflects not the limited scope of a professional craftsman, but a broad cultural background–a profound interest not only in esthetics generally and in psychological insight, but in physics and the sciences as well. Russian-born, daughter of a psychiatrist, Maya Deren attended Syracuse University, when she first became interested in film, and received her B.A. from New York University and her M.A. from Smith College, both degrees in literature.” (Publisher’s Note)