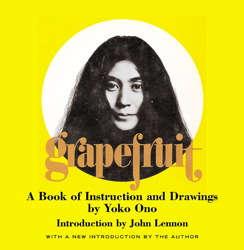 Grapefruit is an artist’s book written by Yoko Ono, originally published in 1964. It has become famous as an early example of conceptual art, containing a series of “event scores” that replace the physical work of art – the traditional stock-in-trade of artists – with instructions that an individual may, or may not, wish to enact.