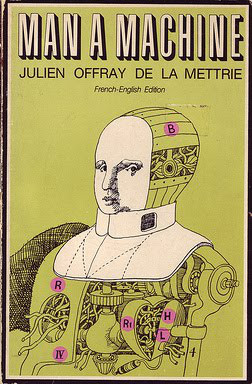 French physician and Enlightenment thinker Julien Offray de La Mettrie (1709–51) was the most uncompromising of the materialists of the eighteenth century, and the provocative title of his work ensured it a succès de scandale in his own time.

“In 1747, La Mettrie wrote a small but powerful book arguing that the soul, the human will, and consciousness were all reducible to bodily processes. According to La Mettrie, ‘The human body is a machine which winds its own springs.’

La Mettrie’s L’homme machine (Man a Machine or Machine Man) was likely completed in August of 1747. The book was controversial, arguing against the traditional notion of soul and suggesting that man was no different than any other animal. This small volume espousing this materialist philosophy was just over one hundred pages long, written in forceful but casual prose. Less than half a year after its publication, the book became the center of controversy and led to La Mettrie’s self-exile from Holland.

The book was printed anonymously and copies were circulating in Holland by December. On December 18th, the publisher—Elie Luzac—was called before the Consistory Church of Leyden and ordered to deliver all copies of the book for burning and to promptly reveal the author. The publisher indeed delivered some copies for burning, but claimed he did not know who had written the piece. The following year, the publisher issued two more printings of the book and then promptly left Holland.

In the meantime, rumors began to circulate that La Mettrie was the author of the book. La Mettrie was not naïve about the potential outcomes of this: he had previously fled his native France after the public burning of his 1745 book The Natural History of the Soul. He therefore fled Holland to Berlin on February 7, 1748, where he came under the protection of Frederick the Great who provided him with sanctuary and a small pension and made him the official court physician. La Mettrie died of food poisoning in Potsdam in 1751.” (from Cathy Faye, “Banned and Burned Books: La Mettrie’s L’homme machine“)