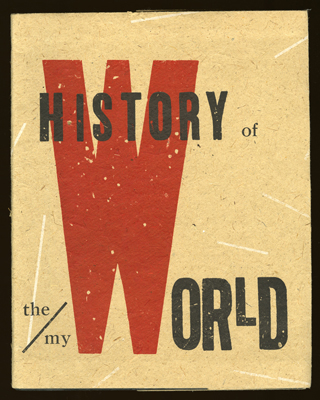 A striking alternative to the familiar telling of historical events, Drucker’s account of mythic and major events in the course of western civilization marches roughshod over received traditions. The combination of typographic innovation, visual puns and linguistic play are unique elements of her style. A richly suggestive work interweaving official history and individual memory.

“Several themes interweave in this book: a feminist rewriting of the history of the world, an opposition between official history and personal memory, a critique of feminist theoretical attitudes towards language as patriarchal, and all sorts of graphical and textual puns and play. The book is a tribute to my mother, and the drum majorette who opens the book is a figure that corresponds to her early years, youth, and activities as a baton twirling teen in Downer’s Grove, Illinois. I had learned language, and literature, through an intense and intimate relation with her. The feminist dogma of language as patriarchal didn’t fit the erotic and personal experience of my relation to the literary through the relation to her, even male identified as she was. She may have been the law, and the symbolic, but she was fiercely feminine and feminist as well. So the red text erupts through the black, making memory a strain of presence within the history retold.” (author)

The work first appeared in the letterpress edition in 1990. Five years later it was published in two-color offset by Granary Books.

Interview with the author (Tate Shaw, The Journal of Artists’ Books, 2007)