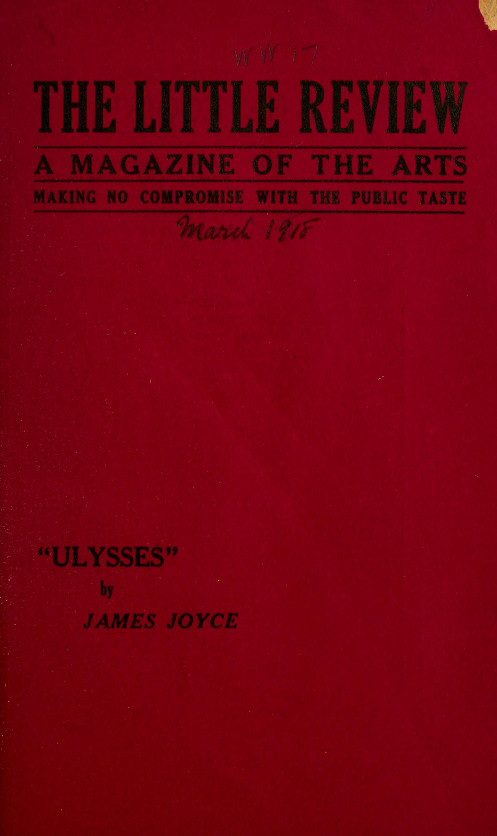 Ulysses was first serialised in parts in the American journal The Little Review from March 1918 to December 1920, and then published in its entirety by Sylvia Beach in February 1922, in Paris. One of the most important works of Modernist literature, it has been called “a demonstration and summation of the entire movement” (Beebe). “Before Joyce, no writer of fiction had so foregrounded the process of thinking” (Kiberd).

Ulysses chronicles the passage of Leopold Bloom through Dublin during an ordinary day, 16 June 1904 (the day of Joyce’s first date with his future wife, Nora Barnacle). The title alludes to Odysseus (Latinised into Ulysses), the hero of Homer’s Odyssey, and establishes a series of parallels between characters and events in Homer’s poem and Joyce’s novel.

Ulysses is approximately 265,000 words in length and uses a lexicon of 30,030 words (including proper names, plurals and various verb tenses), divided into eighteen episodes. Since publication, the book attracted controversy and scrutiny, ranging from early obscenity trials to protracted textual “Joyce Wars.” Ulysses‘ stream-of-consciousness technique, careful structuring, and experimental prose—full of puns, parodies, and allusions, as well as its rich characterisations and broad humour, made the book a highly regarded novel in the Modernist pantheon. In 1998, the Modern Library ranked Ulysses first on its list of the 100 best English-language novels of the 20th century. Joyce fans worldwide now celebrate 16 June as Bloomsday.

In 1919, sections of the novel appeared in the London literary journal, The Egoist, but the novel itself was banned in the United Kingdom until the 1930s. In 1920 after the US magazine The Little Review serialised a passage of the book dealing with the main character masturbating, a group called the New York Society for the Suppression of Vice, who objected to the book’s content, took action to attempt to keep the book out of the United States. At a trial in 1921 the magazine was declared obscene and, as a result, Ulysses was banned in the United States. In 1933, the publisher Random House arranged to import the French edition and have a copy seized by customs when the ship was unloaded, which it then contested. In United States v. One Book Called Ulysses, U.S. District Judge John M. Woolsey ruled on December 6, 1933 that the book was not pornographic and therefore could not be obscene, a decision that was called “epoch-making” by Stuart Gilbert. The Second Circuit Court of Appeals affirmed the ruling in 1934. Contrary to popular belief, Ulysses was never banned in Ireland. (from Wikipedia)