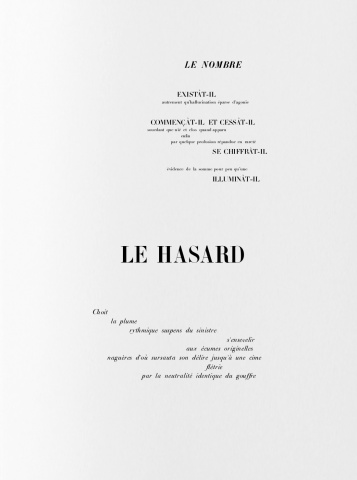 Un coup de Dés jamais n’abolira le Hasard is one of the most well-known works of the French Symbolist poet Stéphane Mallarmé.

In 1874, Mallarmé made his early mark in the field of “graphic design by creating single-handedly one of the first fashion journals, La Dernière mode, which ran for six issues. Consequently, he began around this time to take notes on what he considered to be his ultimate poetic project, the publication of what he called ‘the Book’, a poetic object that would replace the Bible as a central figure in a sort of secular art/religious ritual. While the Book was never fully realized, Mallarmé’s increasing concern over the ‘crisis in verse’ — basically, the arrival of free verse in France, and the untoward retirement of the much-loved alexandrine — led him to conceive the 12 pages of Un coup de dés, whose words spill across the pages like stars strewn across the sky or, indeed, like throws of the dice. Mallarmé’s fellow Symbolist Paul Valéry wrote a memorable description of first seeing the poem in The Master’s workshop:

‘It seemed to me that I was looking at the form and pattern of a thought, placed for the first time in finite space. Here space itself truly spoke, dreamed, and gave birth to temporal forms. Expectancy, doubt, concentration, all were visible things. With my own eye I could see silences that had assumed bodily shapes. Inappreciable instants became clearly visible: the fraction of a second during which an idea flashes into being and dies away; atoms of time that serve as the germs of infinite consequences lasting through psychological centuries — at last these appeared as beings, each surrounded with a palpable emptiness [..] There in the same void with them, like some new form of matter arranged in systems or masses or trailing lines, coexisted the Word!’

Like many readers of Un coup de dés, Valéry thought he was gazing on a poem that reflected an improvisatory air: a map of a human mind, not to mention a chart through “psychological centuries.” The heroic nature of Mallarmé’s achievement, of a sort that seems decidedly unfashionable in poetry today, is palpable in Valéry’s breathless encomium. The poem has since been seen as one of the most successful typographical achievements ever, harbinger of the experiments of the Futurists and Dadaists, not to mention the mesostics of John Cage, Brazilian concrete poetry, Flash and animated poetry, and interactive iPad apps like Jörg Piringer’s whimsical ‘abcdefghijklmnopqrstuvwxyz’.” (from Brian Kim Stefans’ review of Meillassoux’s The Number of the Siren)

See also Marcel Broodthaers’ rendering of the poem, 1969 (French)
and Quentin Meillassoux’s The Number and the Siren, 2011/2012 (French, English)