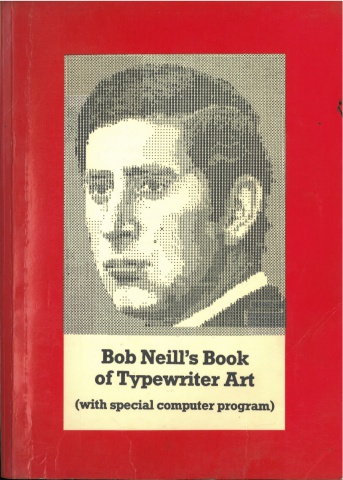 “Bob Neill, artist of the typewriter, was born in the Kent village of Aylesford and practises as a professional Hypnotherapist in the County Town of Maidstone. He first started typing pictures on his typewriter in 1960, having read about a woman in Spain who was producing this form of typewriter art. His first effort was a portrait of a magazine cover-girl which was published in the Star evening newspaper.

He then continued with his newly-discovered hobby, producing pictures and portraits which have been exhibited widely and published in various magazine and journals. A selection of his work appears in this book together with the secrets of Typewriter Art and a computer programme to enable some of the pictures to be produced on a home computer (such as the Commodore PET) using the BASIC computer language.

So many people have asked him how to start this new-found hobby that he come [sic] up with the idea of writing patterns for his pictures so that more people could enjoy the hobby of Typewriter Art. He has perfected the method over the years making it so easy that even children of eight have produced excellent pictures unaided.

Bob Neill’s Book of Typewriter Art gives you the chance whatever your age or artistic ability, to create for yourself fascinating pictures on the typewriter by following the simple instructions and patterns within these pages. What Bob Neill has worked out with painstaking care over the years can be yours to enjoy as you begin the absorbing and fascinating hobby of Typewriter Art.” (from the back cover, via Juliette Kristensen)

Images include that of Queen Elizabeth, Prince Philip, Prince Charles, Princess Diana, a Horse, a Prarie Wolf, a Siamese Kitten, a Red Setter, a White Persian Cat (Full Body and Head Only), Telly Savalas (Kojak), Elvis Presley, a Tiger, a Bush Baby, a Mountain Scene, The Rose, The Nude, The Arab, The Pope and a Mystery Picture.