Darren Wershler-Henry: The Iron Whim: A Fragmented History of Typewriting (2005) 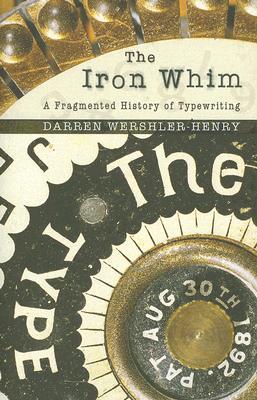 “The Iron Whim is a history of writing culture and technology. It covers the early history and evolution of the typewriter as well as the various attempts over the years to change the keyboard configuration, but it is primarily about the role played by this marvel in the writer’s life. Darren Wershler-Henry populates his book with figures as disparate as Bram Stoker, Mark Twain, Franz Kafka, Norman Mailer, Alger Hiss, William Burroughs, J. G. Ballard, Jack Kerouac, Hunter S. Thompson, Northrop Frye, David Cronenberg, and David Letterman; the soundtrack ranges from the industrial clatter of a newsroom full of Underwoods to the more muted tapping and hum of the Selectric. Wershler-Henry casts a bemused eye on the odd history of early writing machines, important and unusual typewritten texts, the creation of On the Road, and the exploits of a typewriting cockroach named Archy, numerous monkeys, poets, and even a couple of vampires. And by broadening his focus to look at typewriting as a social system as well as the typewriter as a technological form, he examines the way that the tool has shaped the creative process.”