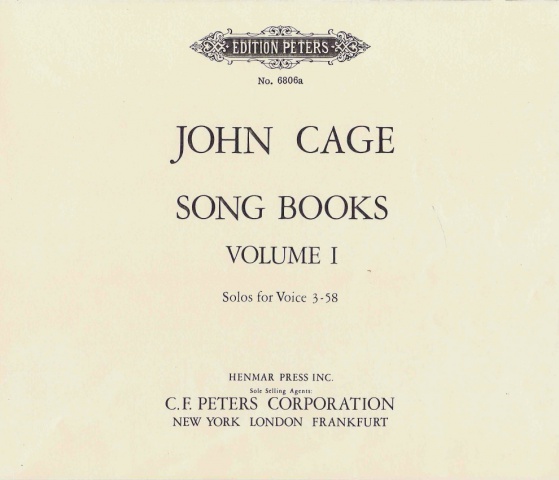 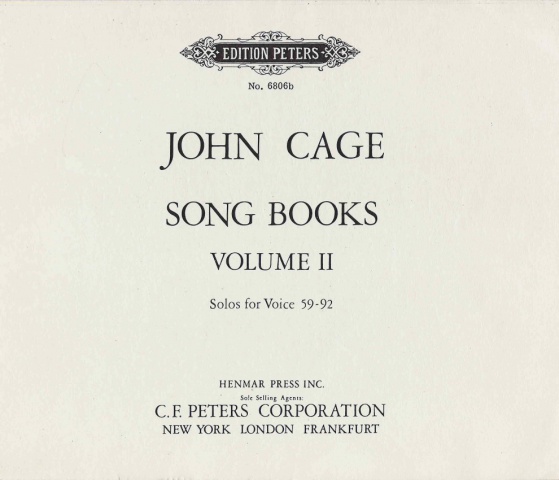 But Cage’s literary-musipolitical sprawl keeps returning to Thoreau. The score includes such material as a portrait of Thoreau (Solo 5) and a map of Concord (Solo 3), to be wandered over in order to suggest a melodic line; a description of Thoreau’s nature walks (Solo 4); and remarks from Thoreau’s journal about the telegraph harp (Solo 17), as well as syllable mixes from the journal (Solo 85). The score also calls for showing twenty-two Thoreau-related slides and presenting something by Thoreau as a gift to some member of the audience.

Cage’s most emphatic invocation of Thoreau, however, is the lengthy Solo 35. Its eleven pages of text essentially repeat again and again, in slightly different verbal and rhythmic arrangement, the opening declaration of Civil Disobedience: ‘The best form of government is no government at all’. Cage called for Thoreau’s words to be rhapsodized. His instructions read: ‘Sing in an optomistic [sic] spirit. .. Before singing this solo, raise either the black flag of Anarchy or the flag of the Whole Earth .. do not lower it at any time during the performance.’

Cage’s Song Books most effectively raises the Thoreauvian flag of anarchy by acting it out. In a sort of indeterminacy gone wild, singers are free to choose to perform any number of any solos they wish for any length of time in any order—accompanied, if they wish, by other indeterminate music, such as the Concert for Piano and Orchestra. They also freely choose their own costumes, and sometimes their own words and pauses—one performer not more important than another, each doing his or her own thing. Having created this uncompetitive model of ‘practical global anarchy’, Cage laughingly said that it was nearly impossible to consider Song Books a work of art: ‘Who would dare? It resembles a brothel, doesn’t it?'” (from Kenneth Silverman, Begin Again: A Biography of John Cage, 2010)

Volume 1: Solos for Voice 3-58 (53 MB)
Volume 2: Solos for Voice 59-92 (24 MB)
Note: There was also a third volume published. Entitled “Instructions” it contains various tables and other materials necessary for performance of some of the pieces.