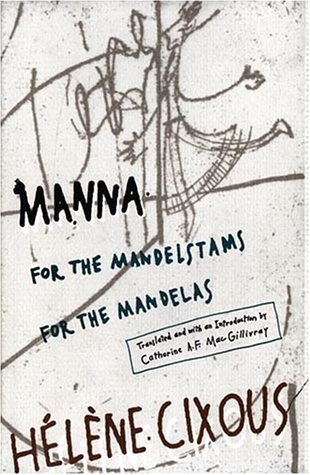 “They didn’t know each other, but they knew the same suffering.

A Russian Jewish poet who died in exile in Siberia; a South African political leader who survived his banishment to prison: The two men, Osip Mandelstam and Nelson Mandela, so far apart in time and space, are brought together in this story, their shared destinies unraveled in light of the Jewish and African diasporas.

In Manna, Hélène Cixous, a writer associated with the notion of écriture féminine and a major figure in Continental feminist practice during the 1970s and early 1980s, continues her disruption of the orthodoxies of politics and social order through the liberating use of poetic language. In this act of willful writing, by turns lyrical and intense, she links her two distant subjects through the common first syllables of their names, the dates of their respective exiles, and the women, Nadezhda Mandelstam and Winnie-Zami Mandela, who disclose and restore their partners’ lives through language.

For Cixous, politics is approached most openly and freely through poetry; no social change occurs without linguistic change. In Manna her poetic language mediates the historical, political, and personal narratives of Mandelstam and Mandela (two cores lodged in the heart of the world) to produce a new sense of individual tragedy and cultural possibility. An act of emancipation, exhilarating in the way it subverts the master texts of social and political power, this strange and beautiful book releases its subjects-and its readers-from the limited language of constraint and exile.”