Jacques Derrida: Specters of Marx. The State of the Debt, the Work of Mourning and the New International (1993/1994) 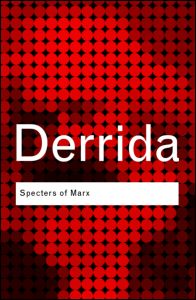 Prodigiously influential, Jacques Derrida gave rise to a comprehensive rethinking of the basic concepts and categories of Western philosophy in the latter part of the twentieth century, with writings central to our understanding of language, meaning, identity, ethics and values.

In 1993, a conference was organized around the question, ‘Whither Marxism?’, and Derrida was invited to open the proceedings. His plenary address, ‘Specters of Marx’, delivered in two parts, forms the basis of this book. Hotly debated when it was first published, a rapidly changing world and world politics have scarcely dented the relevance of this book.