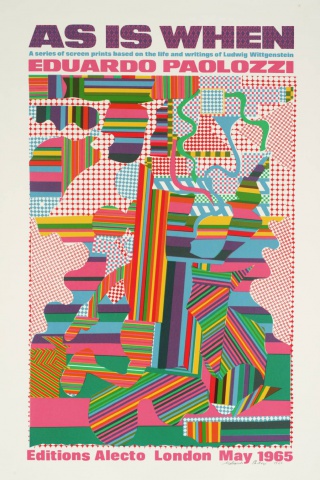 As Is When is Eduardo Paolozzi’s homage to the philosopher Ludwig Wittgenstein created after reading his biography written by George Vaughan Wright. Wittgenstein’s study of linguistic systems coincided with Paolozzi’s love of toys and games and influenced his approach to the “syntax” and “vocabulary” of picture-making. The work began as a series of collages whose components were drawn from Paolozzi’s vast collection of found printed ephemera, which included such diverse materials as Woolworth wrapping paper and clippings from engineering manuals. Each of them was accompanied by quotations from Wittgenstein’s own writings or passages from the biography book.

Paolozzi has described the prints as “a kind of combined autobiography”. The screenprint process was realised by Chris Prater of Kelpra Studio. Paolozzi credits Prater with “reinterpreting a series of collages into a sound homogenous graphic [that was].. highly innovative, highly inventive, or, in some cases, another art form.” The images in As Is When are considered by many to be the first Pop masterworks of screenprint in England. In the U.S., Warhol had only released isolated editions by this point, and important portfolios such as 11 Pop Artists and Grafik des Kapitalistischen Realismus were yet to happen. (Source)

The titles of the prints are as follows (in the order in which appear in the PDF): Poster; Artificial Sun; Tortured Life; Experience; Reality; Wittgenstein the Soldier; Wittgenstein in New York; Parrot; Futurism at Lenabo; Assembling Reminders for a Particular Purpose; The Spirit of the Snake; He must, so to speak, throw away the ladder; Wittgenstein at the Cinema Admires Betty Grable.