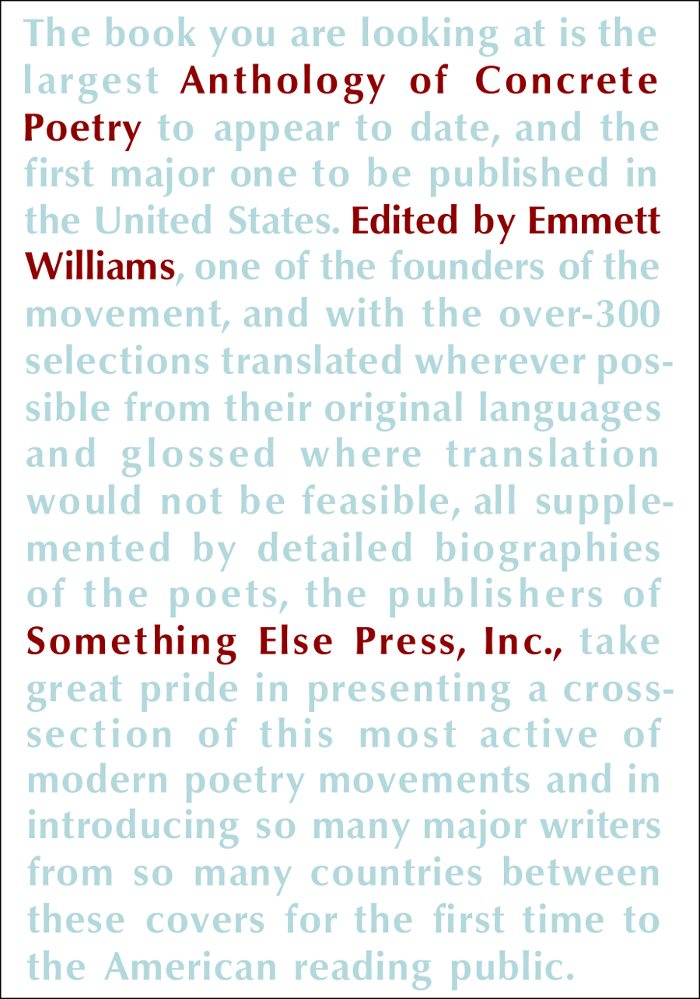 “Concrete Poetry is not one style but a cluster of possibilities, all falling in the Intermedium between semantic poetry, calligraphic and typographic poetry, and sound poetry.

It first crystalized out of these earlier modes in the early 1950s in the works of such people as Eugen Gomringer (CH), Carlo Belloli (IT), Dieter Rot (IS), Öyvind Fahlström (SW), the Noigandres Group (Haroldo and Augusto de Campos, Décio Pignatari and others, BR), Carlfriedrich Claus (GDR), Gerhard Rühm, Friedrich Achleitner and H.C. Artmann (AT), Daniel Spoerri and Claus Bremer (DE), and Emmett Williams (US, then living in DE). In recent years a second generation of major figures have added to the movement, including such people as Hansjörg Mayer (DE), Ladislav Novák and Jiří Kolář (CZ), Edwin Morgan and Ian Hamilton Finlay (SC), Bob Cobbing (EN), bp Nichol (CA), Mary Ellen Solt and Jonathan Williams (US), Pierre and Ilse Garnier (FR), Seiichi Niikuni and Kitasono Katue (JP) and many others.

The very fact of the appearance of parallel work more or less independently in so many countries and languages indicates one of the unique aspects of the movement, namely its source being in the development of a new mentality in which values become fused and inter-relationships established on a more complex plain than was the case in the purer, earlier modes of poetry.” (Something Else Press, 1967)