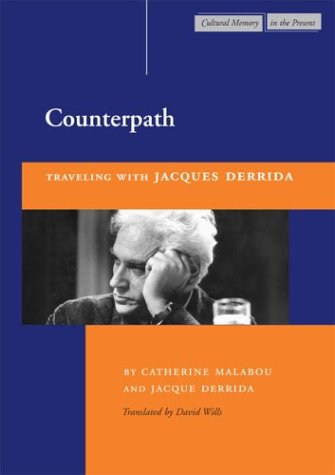 “Counterpath is a collaborative work by Catherine Malabou and Jacques Derrida that answers to the gamble inherent in the idea of “travelling with” the philosopher of deconstruction. Malabou’s readerly text of quotations and commentary demonstrates how Derrida’s work, while appearing to be anything but a travelogue, is nevertheless replete with references to geographical and topographical locations, and functions as a kind of counter-Odyssey through meaning, theorizing, and thematizing notions of arrival, drifting, derivation, and catastrophe. In fact, by going straight to the heart of the Derridean idea of “spacing,” she finally makes it seem as though Derrida has never written about anything but travel.

Malabou’s text is punctuated by a series of postcards received by Derrida from destinations such as Istanbul and Porto, Laguna Beach and Athens, which are inspired by his reading of her evolving discussion. Writing in a familiar and unguarded manner, as if he were “on vacation” from his own writing, Derrida still remains totally faithful to that work and invites the reader to reflect on much of what haunts his texts as well as his daily life, questions of distance and death, the relation to the other, and exile..”