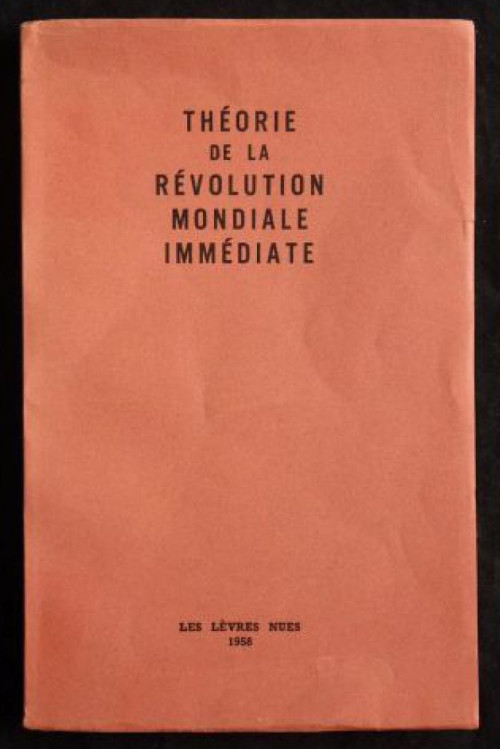 “Théorie de la revolution mondiale immediate was part of a triple issue of Marïen’s journal Les lèvres nues and ends its first series. It was later published as a stand-alone book. Its avowed purpose was “a sketch of an imaginary program for the overthrow of capitalism in every part of the world it controls, to be completed within a year, with a program applicable at any moment and everywhere at the same time.” (45)

The first half of the text is an analysis of contemporary capitalism under the shadow of nuclear annihilation. These days one might worry more about the Anthropocene, but rhetorically, the problem is similar: how to think a revolution at a time when it appears both absolutely necessary and extremely unlikely.

The first part is a sound analysis of the stage commodification had reached by the late fifties, And bears comparison with the better remembered texts of the time. The very success of the worker’s movement in its reformist form had produced a leisure culture. Workers were becoming petit-bourgeois in outlook. Technical change had raised up a cadre of educated workers. Communist propaganda no longer worked very well, whereas capitalist propaganda was making inroads into the unconscious of the working class.

The second part is more surrealist science fiction than social science. For the project there is to use the spectacle itself for revolutionary ends. The form of revolutionary organization is the advertising agency. It is to be called the Leisure Club. It creates advertising and popular media addressed to every diverse pastime, hobby or consumer preference – all to be worked out using the latest social science techniques. […]

While there are charming features of the book that date it, there are also many ways in which it is strikingly contemporary. As Sven Lütticken has pointed out, it is quite likely that former Tiqqun people borrowed the rhetoric of the Invisible Committee and the Imaginary Party from Mariën. One might also think it an anticipation of Adbusters, or even the strategies of Podemos in Spain, which seems to retain a model of the party of the interior while using contemporary marketing techniques.” (taken from McKenzie Wark’s 2016 essay)