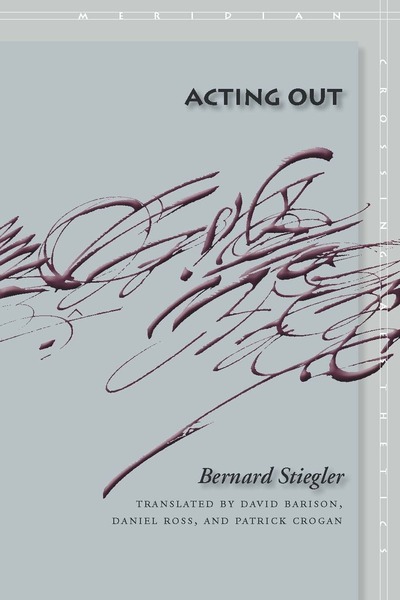 “Acting Out is the first appearance in English of two short books published by Bernard Stiegler in 2003. In How I Became a Philosopher, he outlines his transformation during a five-year period of incarceration for armed robbery. Isolated from what had been his world, Stiegler began to conduct a kind of experiment in phenomenological research. Inspired by the Greek stoic Epictetus, Stiegler began to read, write, and discover his vocation, eventually studying philosophy in correspondence with Gérard Granel who was an important influence on a number of French philosophers, including Jacques Derrida, who was later Stiegler’s teacher.

The second book, To Love, To Love Me, To Love Us, is a powerful distillation of Stiegler’s analysis of the contemporary world. He maintains that a growing loss of a sense of individual and collective existence leads to a decreased ability to love oneself, and, by extension, others. This predicament is viewed through a tragic event: in 2002, in Nanterre, France, Richard Durn, a local activist, stormed the city’s town hall, shooting and killing eight people. Durn committed suicide the following day. The later publication of Durn’s his journal revealed a man struggling with the feeling that he did not exist, for which he tried to compensate by committing an atrocity. For Stiegler, this exemplifies how love of self becomes pathological: a “me” assassinates an “us” with which it cannot identify.”