Gilbert Simondon: On the Mode of Existence of Technical Objects (1958–) [FR, EN, ES] 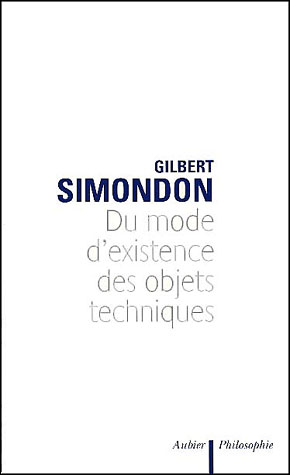 “The purpose of this study is to attempt to stimulate awareness of the significance of technical objects. Culture has become a system of defense designed to safeguard man from technics. This is the result of the assumption that technical objects contain no human reality. We should like to show that culture fails to take into account that in technical reality there is a human reality, and that, if it is fully to play its role, culture must come to terms with technical entities as part of its body of knowledge and values. Recognition of the modes of existence of technical objects must be the result of philosophic consideration; what philosophy has to achieve in this respect is analogous to what the abolition of slavery achieved in affirming the worth of the individual human being.

The opposition established between the cultural and the technical and between man and machine is wrong and has no foundation. What underlies it is mere ignorance or resentment. It uses a mask of facile humanism to blind us to a reality that is full of human striving and rich in natural forces. This reality is the world of technical objects, the mediators between man and nature.” (from the Introduction)