René Leibowitz: Schoenberg and His School: The Contemporary Stage of the Language of Music (1947/1949) 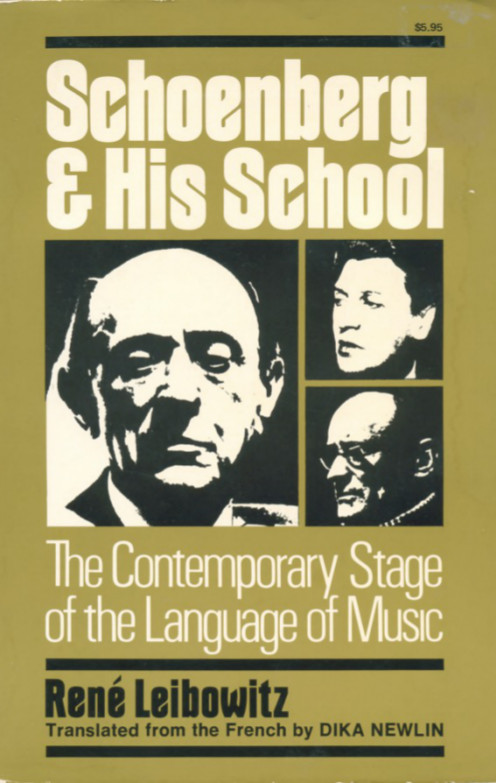 “Founder of the atonal school of composition, Arnold Schoenberg (1874-1951) single-handedly revolutionized the whole of 20th century music. Recognizing that the tonal system of the past 250 years had outlived its usefulness, Schoenberg developed an entirely new system for organizing pitch, dividing the scale into 12 equal tones and eliminating the tonal center which had already reached its vanishing point in the chromaticism of Richard Wagner His twelve-tone scale set composers free from the strictures of the seven-tone scale, allowing them to explore in full the expanded tonal materials of the chromatic scale.

In this now-historic study of Schoenberg’s music and its impact on 20th-century composition, composer/conductor René Leibowitz–a student of both Schoenberg and Webern–traces the history of musical thought from the Renaissance through the early part of the 20th century, thus setting the stage for Schoenberg’s revolutionary abandonment of tonality. He also assesses the works of Schoenberg’s two star pupils. Alban Berg and Anton Webern He shows how Schoenberg’s methods were assimilated–conservatively by Berg and radically by Webern–maintaining throughout that theory was handmaiden to compositional artistry and not the other way around.

Originally published in 1949, Schoenberg and His School was in many ways a musical polemic, an artistic manifesto aimed at focusing public attention on the then neglected works of the atonal composers. Today, with the 1974 Centenary Celebration of Schoenberg’s birth, Leibowitz’ work has assumed renewed importance. Considered one of the most influential interpretations ever published of Schoenberg’s musical aesthetics and philosophy, it remains the touchstone for future considerations of Schoenberg’s contributions to 20th century music.”

3 Responses to “René Leibowitz: Schoenberg and His School: The Contemporary Stage of the Language of Music (1947/1949)”