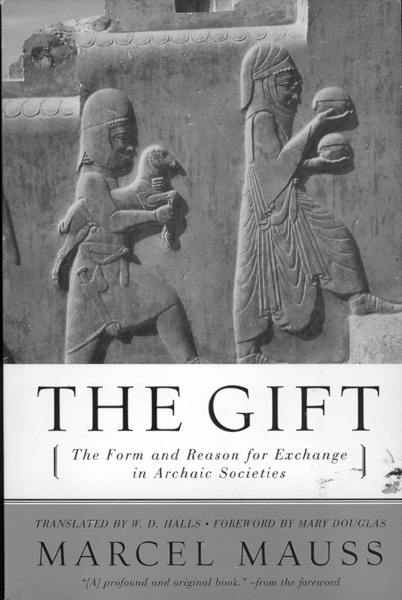 “The Gift is a short book by the French sociologist Marcel Mauss and is the foundation of social theories of reciprocity and gift exchange.

It is perhaps the first systematic study of the custom, widespread in primitive societies from ancient Rome to present-day Melanesia, of exchanging gifts. The gift is conceived as a transaction forming part of all human, personal relationships between individuals and groups. These gift exchanges are at the same time moral, economic, juridical, aesthetic, religious, mythological and social phenomena.

The Gift has been very influential in anthropology, where there is a large field of study devoted to reciprocity and exchange. It has also influenced philosophers, artists and political activists, including Georges Bataille, Jacques Derrida and more recently the work of David Graeber.”