Craig Dworkin: A Handbook of Protocols for Literary Listening (2012) 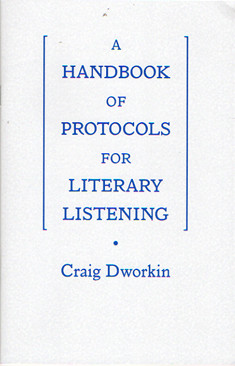 A survey of listening in literature, from Affinity to Ventriloquism, from Judith Goldman to Charles Berstein.

Published for Arika’s A survey as a process of listening programme as part of the 2012 Whitney Biennial.

From the preface: “Some of the most innovative listening has been done by poets. The following handbook catalogues a repertoire of techniques for literary listening. It seeks to identify some of the specific tools with which poets have gauged and transformed the sonic effects of their linguistic environment. Suggestive rather than exhaustive, this guide is not an encyclopedia of practices. Indeed, the hope is that it will serve as a reminder of other examples, an inspiration for further writing, a provocation to further listening, and a locus of surprise (a word which derives in turn from the French surprendre: to overhear).”