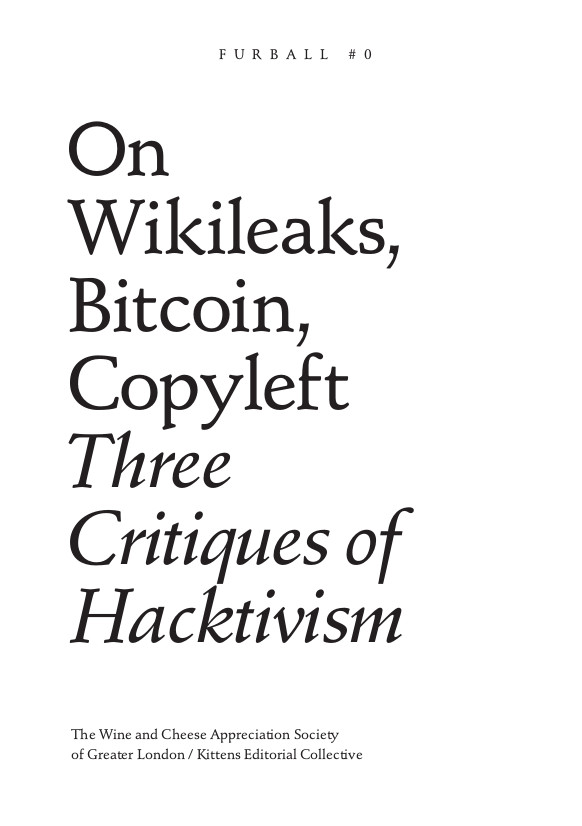 “While most expressions of hacktivism lack this revolutionary vigour expressed in one of the later communiques by now infamous hacking collective AntiSec, hacktivism is widely appreciated for its radical potential. Wikileaks and hacking crews are considered by some as anarchist special forces striking blows against the forces of domination. Bitcoin is regarded as a practical approach to break the power of capital. Free software is thought of as a model for future production beyond capitalism. We disagree.

This booklet collects our writings on activism in the digital realm produced over the last few years. In our piece on Wikileaks — which first appeared in Kittens #1 — we critique Wikileaks’ appreciation of the bourgeois-democratic state which persecutes it. The article on Bitcoin — which previously appeared in Mute Magazine Vol. 3, No. 3 — deals with the political economy of the digital currency and critiques the Libertarian ideology driving it. Finally, our piece on free software and other digital commons — which has not previously been published — portrays how ‘copyleft’ software licences are still expressions of appreciation for the social conditions we are forced to live under.

All three pieces critique both the fallacies inherent in the reasoning behind these projects as well as left-wing hopes attached to them. As such, it might strike the reader as arrogant sneering from the sidelines. However, this is not the intent of this work. We hold that the project of transforming the existing social conditions must start from a correct understanding of these conditions to avoid reproducing them. In this spirit, this booklet is an invitation to critique.” (from the Foreword)