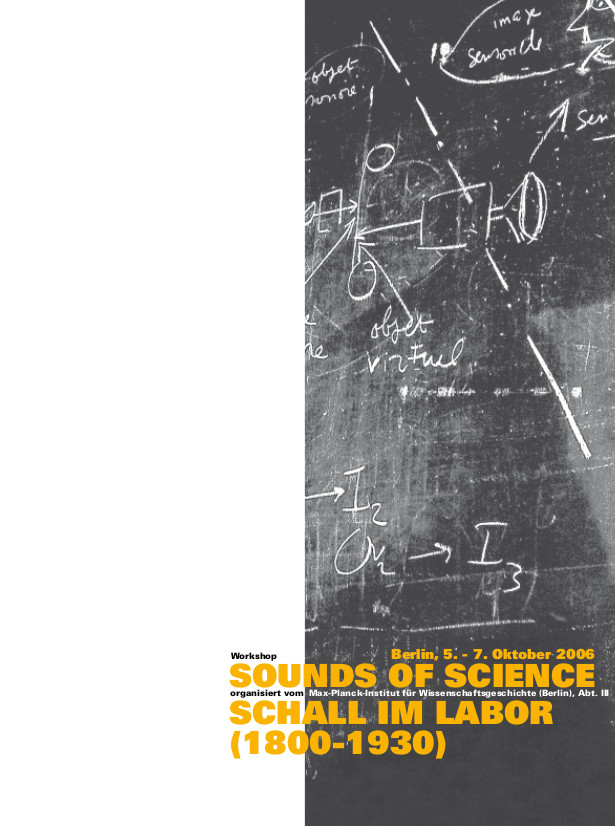 The following collection of papers documents the workshop Sounds of Science – Schall im Labor, 1800 to 1930, carried out at the Max Planck Institute for the History of Science, Berlin, in October 2006.

The workshop asked about the role sound plays in the configurations among science, technology and the arts, focusing on the years between 1800 and 1930. The chronological point of departure was the appearance of a registration technique: in 1802 Ernst Florens Friedrich Chladni published his book on acoustics where he extensively described the Klangfiguren – his visualizations of the movements of a vibrating, sounding body. This time span was also characterized by the systematization of research into hearing, which Hermann von Helmholtz greatly promoted through his book On the Sensations of Tone as a Physiological Basis for the Theory of Music, which first appeared in 1863. Helmholtz’s resonance theory of hearing described in this book was not replaced by a new explanation for the process of hearing until the end of the 1920s, which gives another temporal delineation for the workshop. Furthermore, between 1800 and 1930 a wealth of technical innovation in the realm of acoustical media occurred: in addition to a series of visualization techniques for sound, the phonograph and gramophone, microphone and loudspeaker, telephone and radio were invented. As well, the music of European tonal composition underwent a radical change during this time that led to a collapse of the tonal system and provoked the demand for music composed of sounds and noises, rather than tones.

Conference participants were invited to discuss the role of sounds in the laboratory from different angles, in three parts. The “Materiality of Sound” was oriented towards research into material cultures and cultural techniques in experimentation. “Registration, Transmission, Transformation” put questions of medial historiography into the foreground, while “Experimental Aesthetics” thematized aesthetic implications.