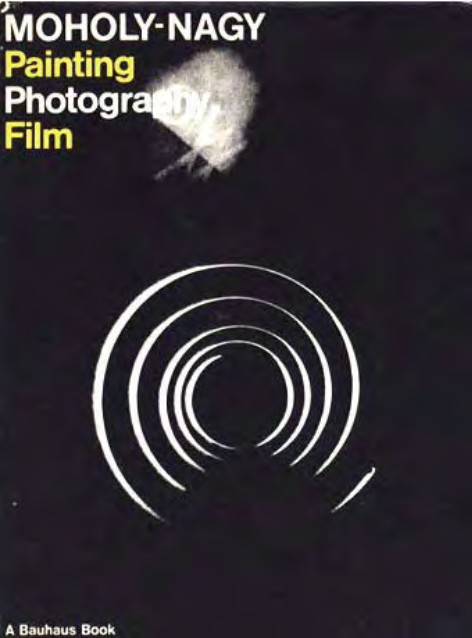 From the English edition: “The layout of the pages designed by Moholy-Nagy in 1927–bold sans-serif captions surrounded by lots of white space; compositions composed of arrows, dots, photographs, and heavy ruled lines — is much more like a movie storyboard or a musical score. It conveys a suggestion of imploding optical and retinal phenomena, much like driving down the Los Angeles Freeway at 70 mph or jolting through Philadelphia on the Metroliner.. This edition is a translation and facsimile of the second German edition of Malerei, Fotographie, Film published in 1927 by the Bauhaus Press; and it serves as a valuable reminder of the graphic design pioneered at the Bauhaus by Moholy-Nagy and Herbert Bayer..”

“Gropius had invited the twenty-eight-year-old Hungarian phenom onto the Bauhaus faculty in 1923, and Malerei Fotografie Film is Moholy-Nagy’s first attempt to lay out his entire theory and program for photography, and ultimately, for the transformation of human vision.. The book’s bold typography and design enacted Moholy’s concept of ‘typofoto,’ involving the integration of type and images, which was further elaborated in his two later theoretical works, Von Material zu Architektur and Vision in Motion..” (Randell Roth)